Although Seemingly Quiet, the Past Week Delivered Noteworthy Market News

With a dearth of major economic releases and news, volatility in the interest rate and equities markets calmed somewhat this week, all producing small changes through Friday's close. The uncertainty of the overhang of $1.9 trillion of new fiscal relief spending about to enter the economy in multiple fashions remains the leading driver of Treasury yields and interest rates, as well as growth and value stock prices.

Nevertheless, there were some releases of note, particularly homes sales numbers and a surprising drop in jobless claims, along with the first combined testimony from both Federal Reserve Chairman Jerome Powell along with Treasury Secretary Janet Yellen before Congress.

There was also another significant step in the formal replacement of the London Interbank Offering Rate, or "LIBOR". The New York state legislature approved their current budget bill that included the much anticipated, and much needed, LIBOR transition rules that will apply to financial transactions governed by New York state law, which the preponderance of LIBOR-related transactions do. 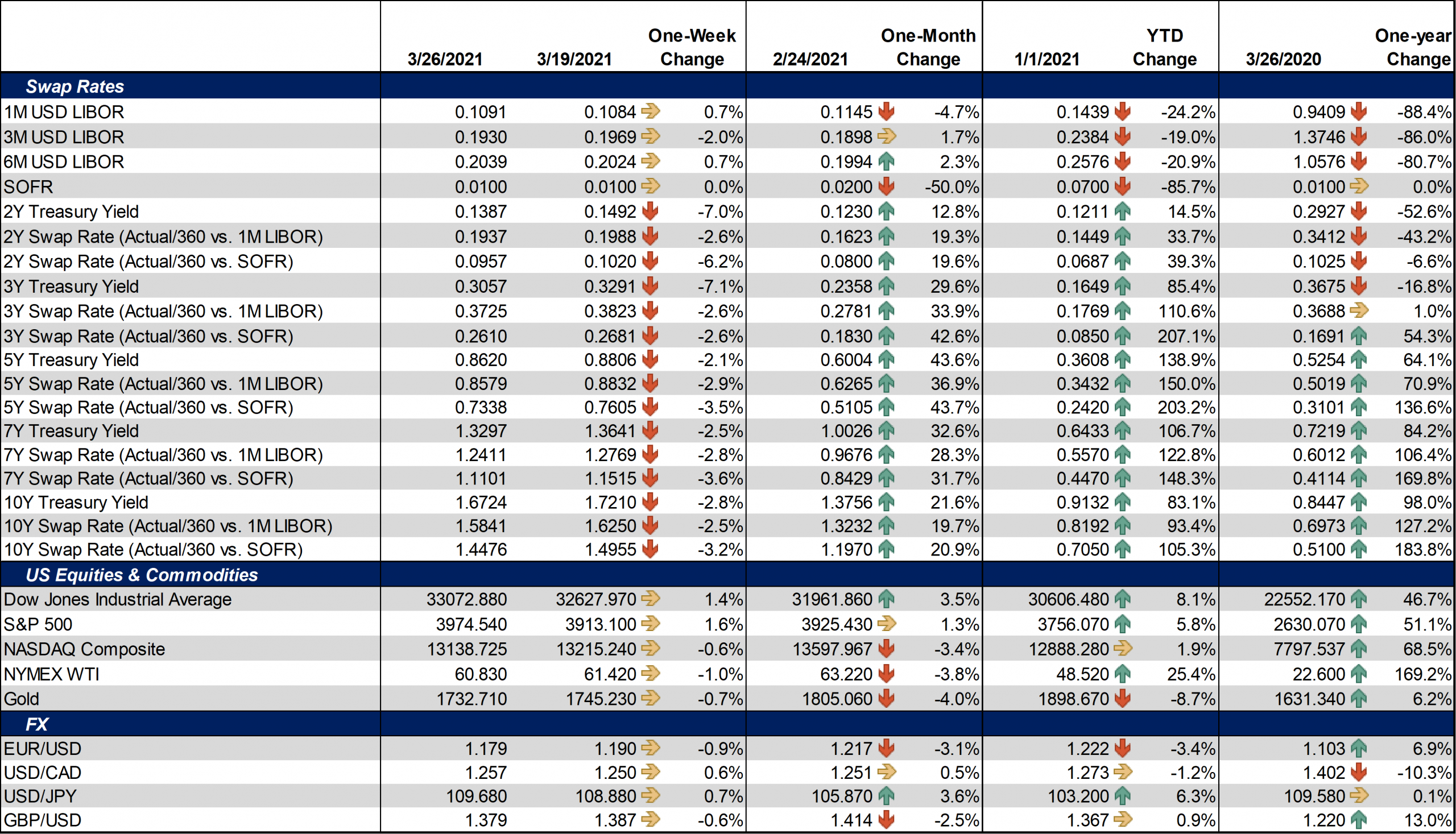 New home sales fell 18.2% in February to a seasonally adjusted 775,000 units while prices rose, according to Tuesday's release by the U.S. Census Bureau and the Department of Housing and Urban Development. Nevertheless, the figure was still 8.2% higher than for February 2020. January's sales number was revised upward to 948,000 from the earlier estimate of 923,000 units sold.

Earlier in the week on Monday, the National Association of Realtors reported that sales of existing homes dropped 6.6% from January. Still, sales were 9.1% higher than a year ago and prices were 15.8% higher. Although strong, the housing market was affected by the poor weather during the month, and more fundamentally by rising mortgage rates (driven primarily by the rise in the ten-year Treasury note yield) and especially tight inventories. There is just not a sufficient supply of existing homes nor new homes being constructed to keep up with current demand, despite the slight increase in mortgage rates.

Housing has been among the brightest spots in the economy since the coronavirus struck a year ago. Even with rising mortgage rates and higher prices, economists say the market should remain strong for the foreseeable future given tight inventories and the demographics of millennials reaching their prime earning years and beginning families.

Many people took steps during the pandemic to save money, boosting the personal savings rate to 20.5% in January, more than 50% higher than pre-pandemic levels. As the country begins to fully reopen, that money is likely to find its way into large purchases, such as houses.

In another sign of the strengthening U.S. economy, weekly applications for unemployment benefits fell to the lowest in a year, signaling improvement for the labor market as more Americans get COVID-19 vaccinations and business restrictions ease in many states.

Initial claims in regular state programs fell by 97,000 to 684,000 claims for the week ended March 20th, Labor Department data showed Thursday. The median estimate among economists surveyed looked for claims to come in at about 730,000. This report was the first that has fallen below the 700,000 mark that served to be the resistance level for several months over the past year since the onset of the pandemic induced economic crisis: 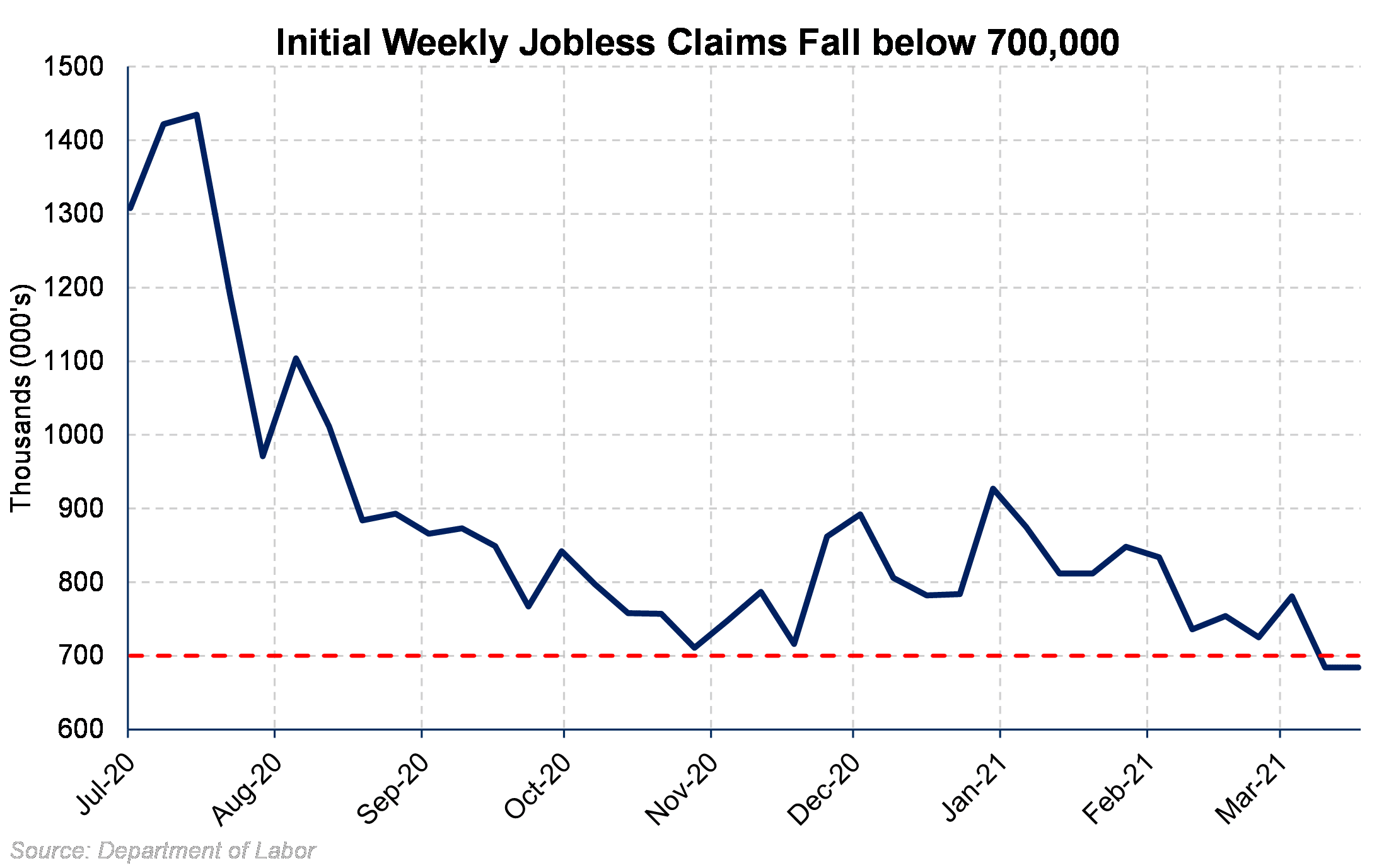 Continuing claims, or the number of Americans collecting ongoing benefits, dropped by 264,000 to 3.87 million for the week ended March 13th.

The initial claims figures suggest that job cuts are easing as businesses reopen and vaccine eligibility expands to more Americans. But the labor market recovery still has a long way to go, as weekly claims remain above the peak during the Great Recession and the total number of unemployed persons is still hovering around ten million.

While the recovery is progressing more quickly than expected, some sectors hit hardest by the virus remain weak, Fed Chair Powell said in remarks before Congress earlier this week. "We welcome this progress but will not lose sight of the millions of Americans who are still hurting, including lower-wage workers in the services sector, African Americans, Hispanics, and other minority groups that have been especially hard hit," Powell said in prepared remarks during a House Financial Service Committee hearing Tuesday.

Powell and Yellen appear before Congress

Earlier this week, Fed Chair Powell and Treasurer Yellen appeared before the House of Representatives' fiscal relief hearing. At the meeting, Powell reiterated the Fed's view on inflation in response to questions about overheating risks from fiscal stimulus in that the Federal Reserve expects a temporary increase in the coming months, but that it will not be sustained because so many Americans will still be out of work. He repeated that the Fed will communicate well in advance when it gets closer to tapering its large scale, quantitative easing bond buying program, thus to avoid a "tantrum" in the bond markets.

Powell and Yellen both fielded several questions about the climate-risk modeling that regulators have increasingly been asking banks to do. They defended the approach, arguing it was an important issue that falls within their mandates, while adding that they are not dictating to banks whom they should or should not be lending to.

In regard primarily equity market bubble concerns, Yellen characterized recent asset valuations as "elevated by historical metrics". Powell added that while "some asset prices are a bit high," banks are very highly capitalized.

Several lawmakers said their states are confused about how they can, or cannot, spend the hundreds of billions of grants included in the recent $1.9 trillion rescue package. Yellen said she would work with lawmakers to make sure states have flexibility to distribute rental assistance funds and that her department would issue more guidance about what tax cuts are permissible if states accept funds from a more than $360 billion pot to support local governments.

Yellen made her strongest statements yet about the personal state and local tax deductions, a beloved break for residents of high-tax states, including New York, New Jersey, and California. The tax write-off was limited to $10,000 in the Trump 2017 tax overhaul, which representatives from many Democratic led states say increased taxes on many of their residents. Yellen said she would work with lawmakers to make sure the "inequities that this caused are remedied in a fair and responsible way."

Although these and other critical topics were discussed, and there was some perceived concern about over-inflated asset prices in certain markets by the Fed Chair and the Treasury Secretary, this testimony had little effect on moving interest rates or equity prices.

Investors expect the third round of stimulus to be a bonanza. Nearly equal to round one, it is anticipated to boost incomes and spending and drive economic growth. The problem is a majority of the upcoming $1,400 government stimulus checks will be saved rather than spent. Asset prices that have been inflated by hopes that the American consumer will ride to the rescue again may be in for a painful surprise.

Even if they spent it all, the boost in spending does not. Shortly after each round of fiscal stimulus, personal income, spending, and retail sales were lifted, as expected. However, afterward, these economic measurements fell back to trend, and in the case of the second stimulus, actually below the trend levels before the first stimulus.

For all the stimulus, the answer to sustained economic growth in 2021 and beyond is more vaccines than vacations. If the stimulus peters out before the economy fully reopens, the history so far during the pandemic crisis suggests the impact will fade, as it did after the last two rounds of fiscal stimulus.

The New York state legislature Wednesday approved a measure that would help prevent hundreds of billions of dollars of financial contracts from descending into chaos when LIBOR starts phasing out at the end of this year for most currencies, and in mid-2023 for most USD LIBOR rates.

The measure, passed by New York's state Senate and Assembly, would allow existing contracts to use replacement indices recommended by regulators, such as the Federal Reserve and the U.S.'s Alternative Reference Rates Committee ("ARRC"). It is similar to the one New York Governor Andrew Cuomo included in his state budget proposal released in January. The bill will now head to Cuomo for his consideration and signature.

While most LIBOR indices in various currencies will be retired at year-end, various tenors of the U.S. dollar denominated LIBOR benchmarks have been given a reprieve from the phase-out until mid-2023, in part to allow older contracts that lack a clear replacement rate to expire naturally. While this will help reduce the threat to financial market stability, the most challenging floating rate debt and securitizations, as well as USD LIBOR-based mortgages and student loans, or "legacy transactions" that will continue in place after the mid-2023 cutoff, will likely have to rely on this critical New York state benchmark fallback legislation.

Despite New York's apparent approval of the regulatory recommended LIBOR fallback legislation, Fed Chair Powell has stated that national legislation, passed by Congress, may also be necessary to ensure a smooth transition. More news on this as it develops.