Chinese metals producers may get relief from power outages as coal production seems to be on the mend. The Shanxi province, which produces nearly 25% of China’s coal, had devastating floods earlier this month. Lack of fuel to power plants had contributed to power outages.  However, reports from over the weekend indicate that trucks are moving from the mines. This may result in higher metals production soon.  The news may have contributed to lower LME Zinc 3M, Aluminum 3M and Copper 3M prices on Monday and Tuesday. 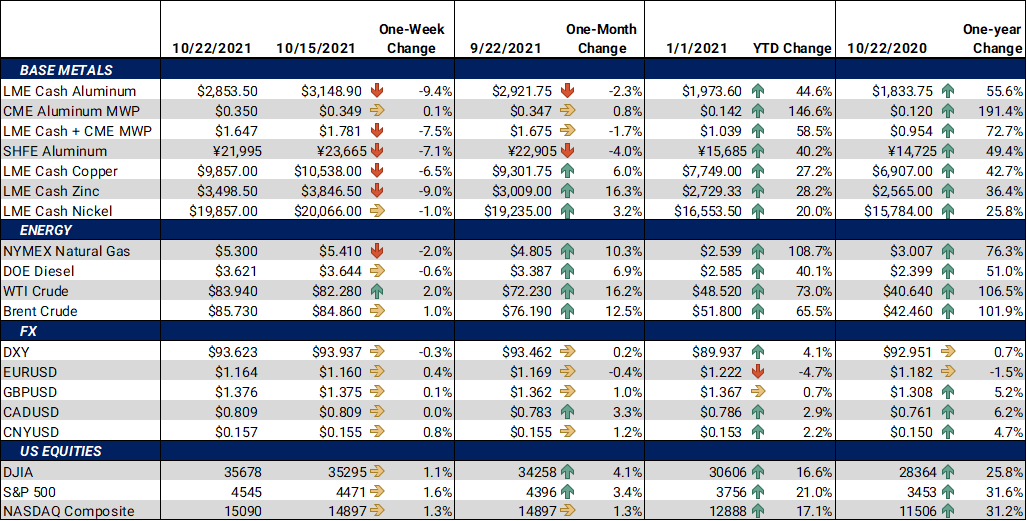 China’s government is looking into the coal crisis. On Tuesday, the National Development and Reform Commission stated they are researching ways they may intervene in the coal markets.  This statement came after a meeting with major domestic coal companies.  Prices for domestic thermal coal, coking coal, zinc, and aluminum all sold off on Wednesday.

Continuing in China, concerns over Evergrande and similar real-estate firms remain. Sinic Holdings defaulted on a $206M bond that matured on Monday.  Shares of Evergrande, which resumed trading on Wednesday, fell 12.5% after a potential asset sale fell through.  However, late Thursday, Evergrande made an $83.5 million interest payment to offshore bondholders.  This last-minute payment averts a potential default, which would have triggered on October 23.  Nearly 25% of China’s GDP is tied to property.  A debt-crisis in the property sector could weigh on deferred metals prices if little construction activity occurs.

In Russia, the ministry of economic development has adjusted metals export taxes. The ministry has removed export duties on some noble alloys; however, duties on some bulk alloys were only lowered to 5%. They are also considering raising and extending the tariff on ferrous scrap.  Lower taxes decrease the all-in cost of supply.