It was an interestingly volatile week on Wall Street, particularly in the equities market. For the first time, retail investors using social media and the proliferation of smaller-sized, zero commission trades apps united to place a squeeze on institutional short sellers, taking many completely out of their short positions in pandemic trounced stocks, resulting in sizable losses. 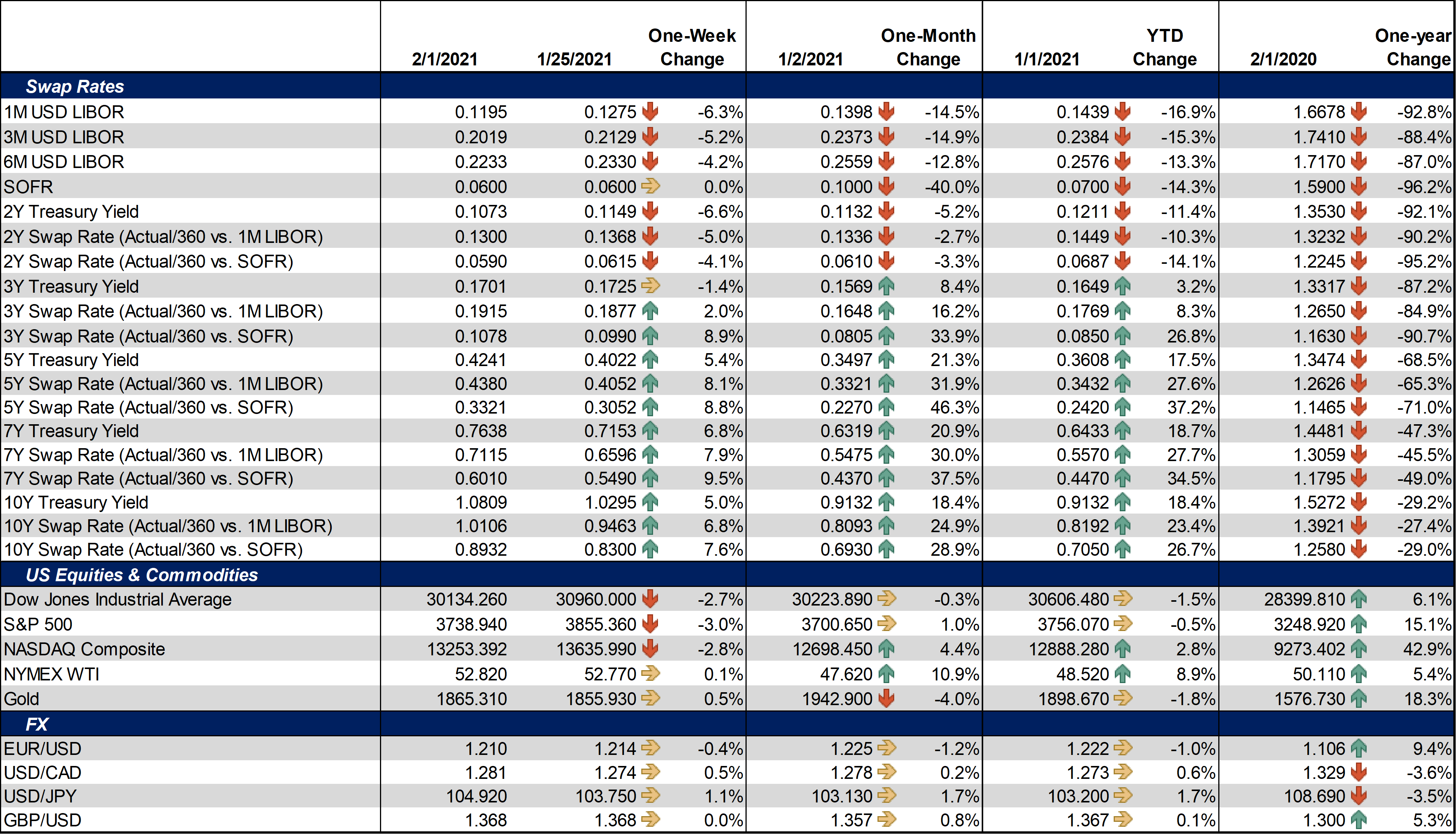 U.S. stocks fell sharply on Friday as heightened speculative trading by retail investors continued to unnerve the stock markets. The Dow Jones Industrial Average ("DJIA") lost 621 points, or 1.6%, after falling below the 30,000 mark at its session low. The 30-stock benchmark posted its worst day since October. The S&P 500 Index fell 1.6% as all 11 of its sectors traded in the red. The NASDAQ Composite slid 1.8%.

Previously in the week on Wednesday, the DJIA lost more than 600 points, suffering its worst sell-off in three months. Then the blue-chip benchmark index rebounded by 300 points on Thursday amid a broad equity market rally. This market also experienced its highest trading volume in years as retail day-trading mania heated up on Wednesday. Total market volume hit more than 23.7 billion shares, surpassing the level during the height of the financial crisis in 2008.

Investors are concerned that if certain heavily shorted stocks, such as GameStop and AMC Entertainment, continue to rise in such a volatile fashion, it may ripple through the financial markets, causing losses at brokers and forcing hedge funds who bet against the stocks to sell other securities to raise required cash.

Meanwhile, new trial results from Johnson & Johnson's ("JNJ") coronavirus vaccine disappointed some investors, weighing on the broader market. JNJ said its one-dose vaccine demonstrated a disappointing 66% effectiveness level overall in protecting against COVID-19, as compared to the approximate 95% level of effectiveness of the already FDA-approved vaccines from Pfizer and Moderna. The JNJ vaccine was 72% effective in the United States, 66% in Latin America, and 57% in South Africa after four weeks, according to the company. The JNJ vaccine, however, offered complete protection against COVID-related deaths.

Stocks have rallied to record highs since the onset of the global coronavirus pandemic partly on the hope that both existing and new vaccines would be effective against COVID-19 to allow a smooth economic reopening soon. New mutations that may be more resilient to vaccines could upend that rosy outlook for investors.

These concerns also effected the bond markets and interest rates during the week. The bellwether ten-year Treasury yield, which started the week at slightly above 1.09%, dipped temporarily intraday Thursday below its newly established floor of 1.00%, to end the week back up at 1.08%. The ten-year Treasury yield held in at above its new support level of 1.00% after breaking this previous resistance level on January 6th following the outcome of the two Georgian senatorial races that provided for a majority, albeit as slim as possible, for Democrats in the Senate to join with their majority in the House and newly elected president: 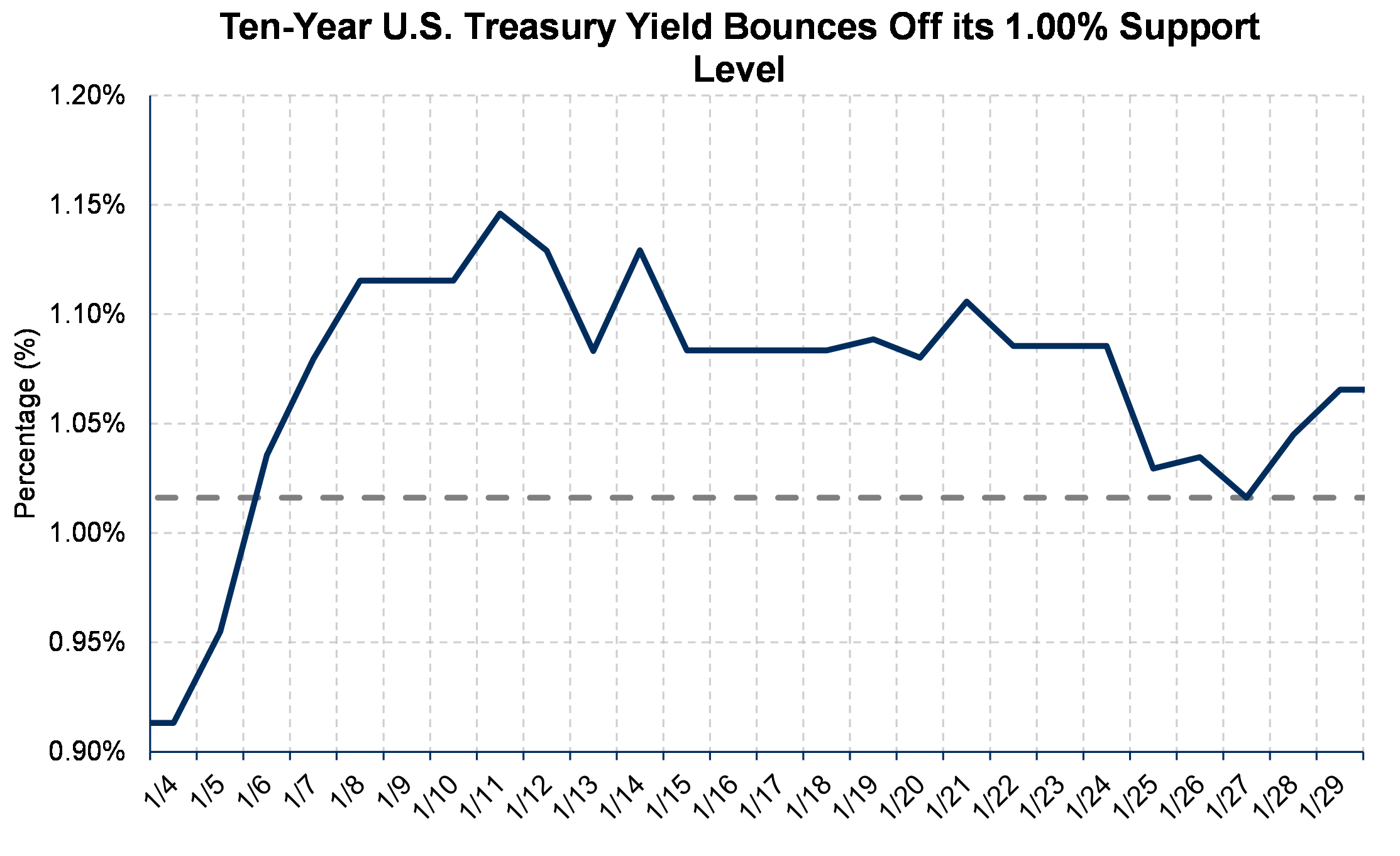 Furthermore, on Friday the one-month and three-month USD LIBOR rates were set at record lows of 0.11950% and 0.20188%, respectively. These benchmark rates have been primarily declining over the past two business weeks, weighed down as yields on Treasury bills and repo agreements have fallen amid a glut of cash in the short-term lending markets: 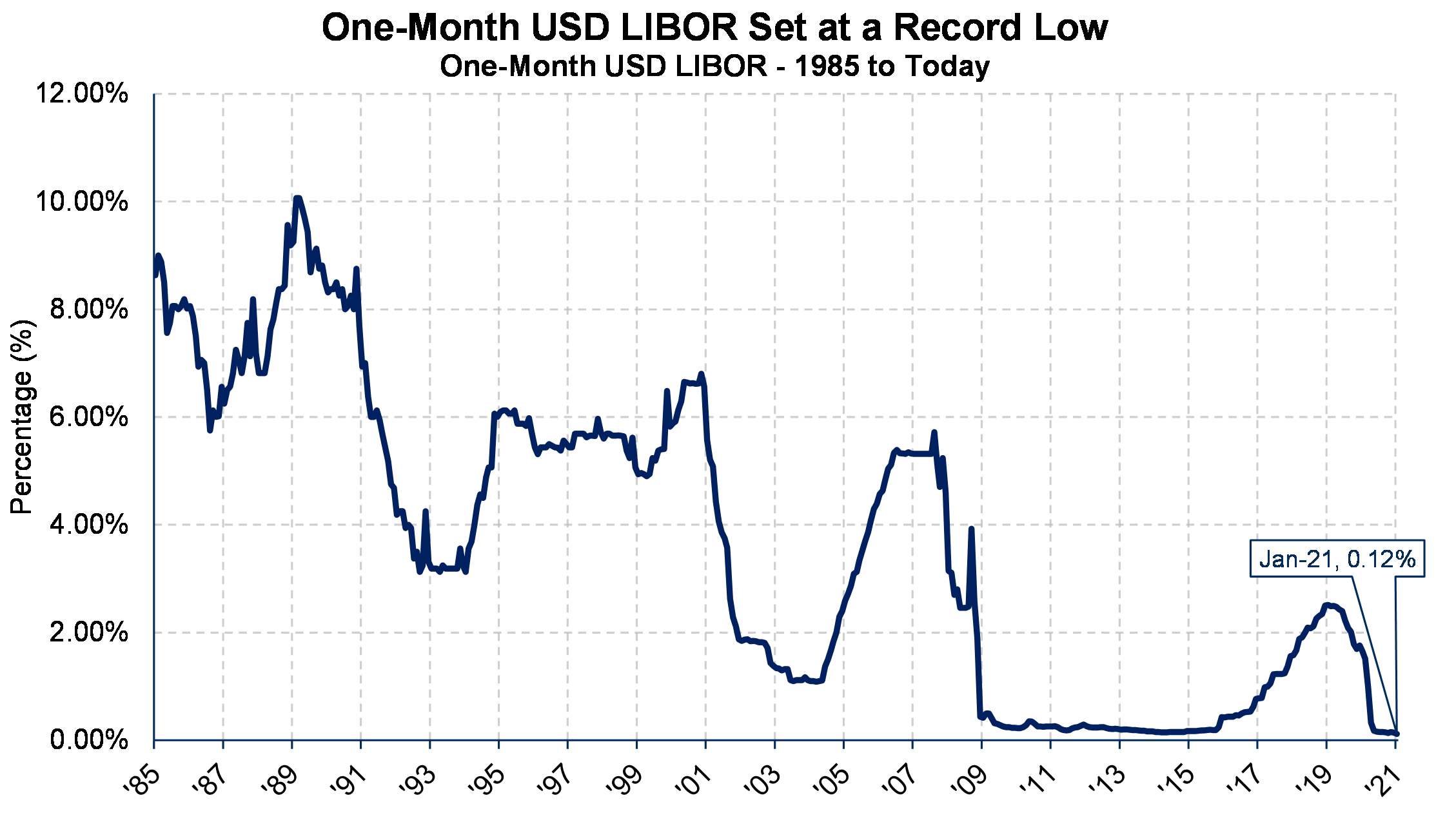 Short-term interest rates were also restrained by the comments that came out of the Federal Reserve's FOMC meeting and 2020's fourth quarter GDP report during the week. In addition, there has been no news out of Washington that would indicate that Democrats and Republicans are any closer to agreeing on the next round of fiscal relief spending.

Speaker of the House, Democrat Nancy Pelosi, claims to still hold out hope for President Joe Biden's ability to persuade Republicans to support a bipartisan $1.9 trillion aid package, a price tag that is too high for most, if not all, Republicans in Congress. Despite this "hope", Pelosi is preparing the House to pass a budget resolution next week, the first step in setting up the reconciliation process that would allow Democrats to approve a coronavirus relief bill without any Republican votes.

Pelosi said the House plans to pass a resolution and send it across the Capitol by the end of next week, where the Senate will also have to pass a budget measure. Once there, Senate Majority Leader, Democrat Chuck Schumer, indicated the chamber would also move to pass the budget resolution. Democrats have pushed to inject more money into speeding up the COVID-19 vaccination effort, supporting households and businesses as a slowing but devastating virus surge batters the economy. Without any new legislation, programs sending an additional $300 per week to jobless Americans and expanding unemployment benefits to self-employed, contract, and gig workers will expire on March 14th.

Biden's plan would send another $1,400 direct payment to most Americans, add a $400 per week unemployment supplement through September, and put $70 billion into COVID-19 testing and vaccine distribution efforts, among numerous other provisions.

While some Republicans have recognized the need for funds to speed up inoculation or endorsed another stimulus check, many GOP lawmakers have criticized the scope of the direct payments and the $350 billion in state and local government aid in Biden's $1.9 trillion plan.

The Federal Reserve, as widely expected, kept its policy rate and asset purchase program unchanged at its FOMC meeting this Tuesday and Wednesday. The commentary by Federal Reserve Chairman Jerome Powell was very dovish, as he signaled that the Fed would provide additional monetary support if deemed necessary.

The Fed left its federal funds interest rate target unchanged and stated that its monthly asset purchase program of $80 billion of Treasury securities and $40 billion of mortgage-backed securities would be continued at this same pace. This served as clarity to Powell's recent inflation comments that sent the bond market into a pre-taper tantrum earlier this month when the ten-year Treasury yield approached 1.20%. Powell reiterated his previous stance, saying that it is too early to discuss tapering asset purchases, and that when the Fed is thinking of starting to reduce its purchase program, it will "communicate it well in advance of what will be a gradual taper". He continued to warn about the "highly uncertain recovery path and the importance of fiscal support." No one has been a bigger cheerleader of increased fiscal support than the exhausted Fed chair.

Of special note, the FOMC adjusted its official announcement wording around the economic recovery, saying that the pace has "moderated" in recent months, and it included that "the progress of vaccinations will be considered in the path of the economic recovery". These added statements undoubtedly added to market weakness during the week.

Going forward, it is anticipated that the Fed's taper discussion will start later this year. This is premised on the successful rollout of vaccinations across the U.S., more fiscal stimulus in the coming months, and the subsequent reduction in COVID-19 infections and deaths, following the current winter surge. Any significant deviation from these assumptions may well keep the Fed in prolonged easing.

The U.S. economy downshifted in the final three months of 2020 after record third quarter growth, as the pandemic battered the labor market and limited Americans' ability and willingness to spend. GDP grew at a 4% annualized rate in the fourth quarter, according to a preliminary estimate released by the Commerce Department on Thursday. The median forecast in a survey of economists called for a gain of 4.2%. 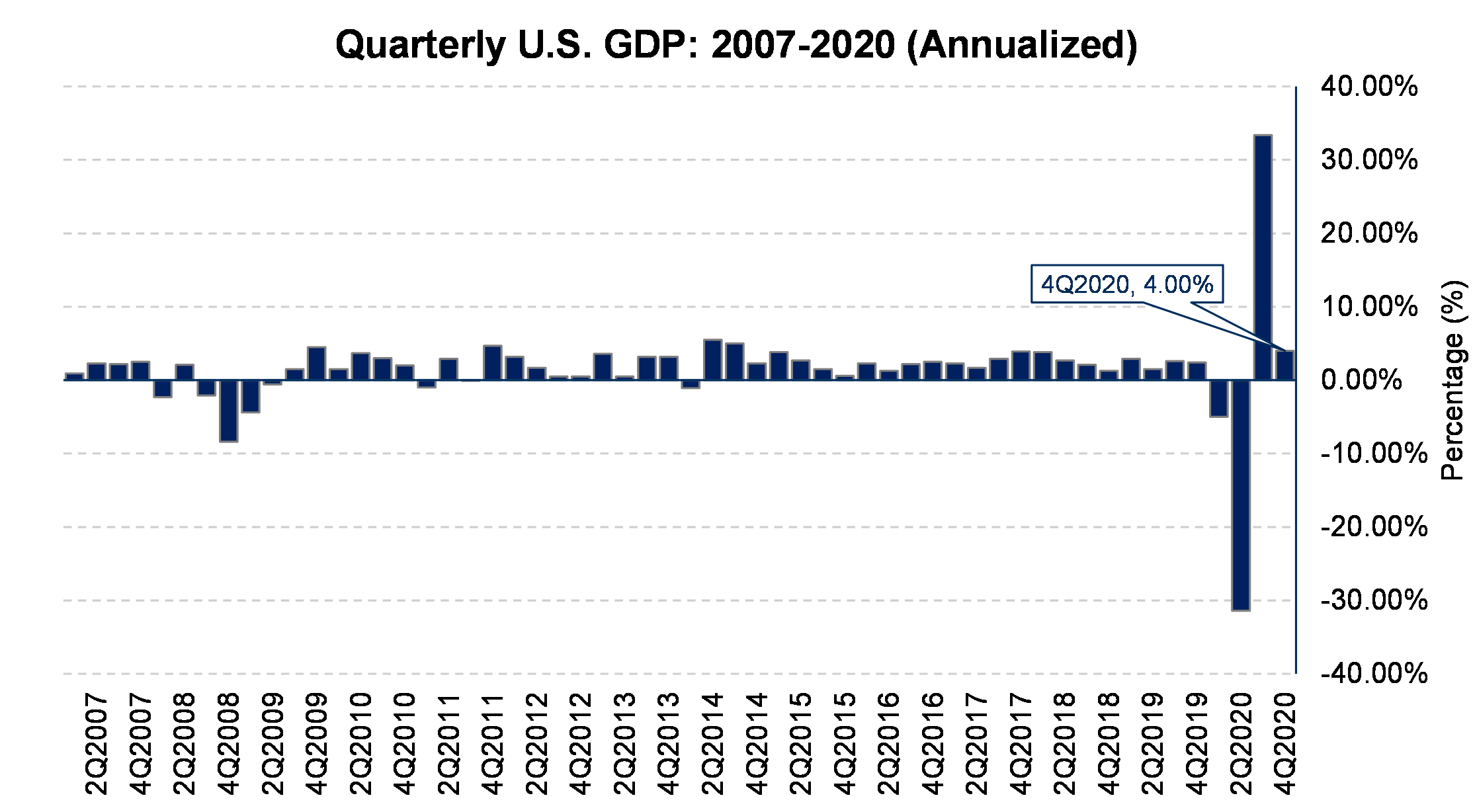 While output of goods and services was far slower than the record 33.4% rate in the third quarter of 2020, the growth pace still exceeded the average of the decade-long expansion that ended early last year prior to the pandemic induced economic collapse. The deceleration in overall fourth quarter growth largely reflected a stark moderation in consumer spending after a third-quarter splurge. Personal consumption, by far the largest component of the economy, increased at a 2.5% rate, trailing projections for a 3.1% rise.