After facing months of downward pressure, it seems Dominion South (DOM S) prices may have found their footing as less production, pipeline maintenance, and operational issues have helped tighten the market.

In addition, the sweltering temperatures that hammered much of the country in June (3rd warmest in terms of CDDs) also caused an increase in demand for natural gas for power generation. 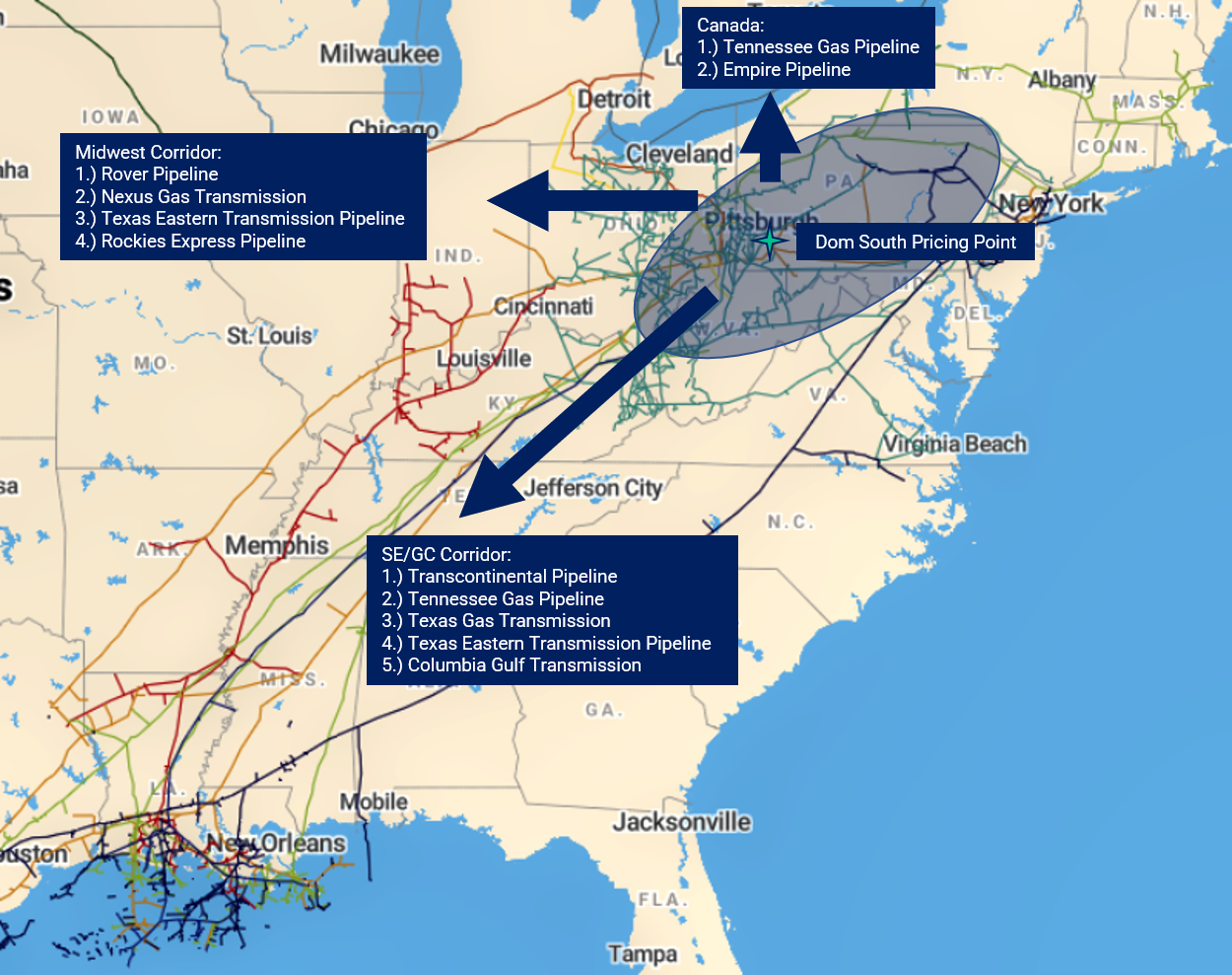 High output levels, matched with limited takeaway capacity, will likely keep Dom S prices depressed for the foreseeable future. In our view, price risks are skewed to the downside until additional capacity comes online or producers are forced to shut in due to price. There is still hope for this summer, however, as local power demand and low storage levels may serve as a potential bulwark for price. 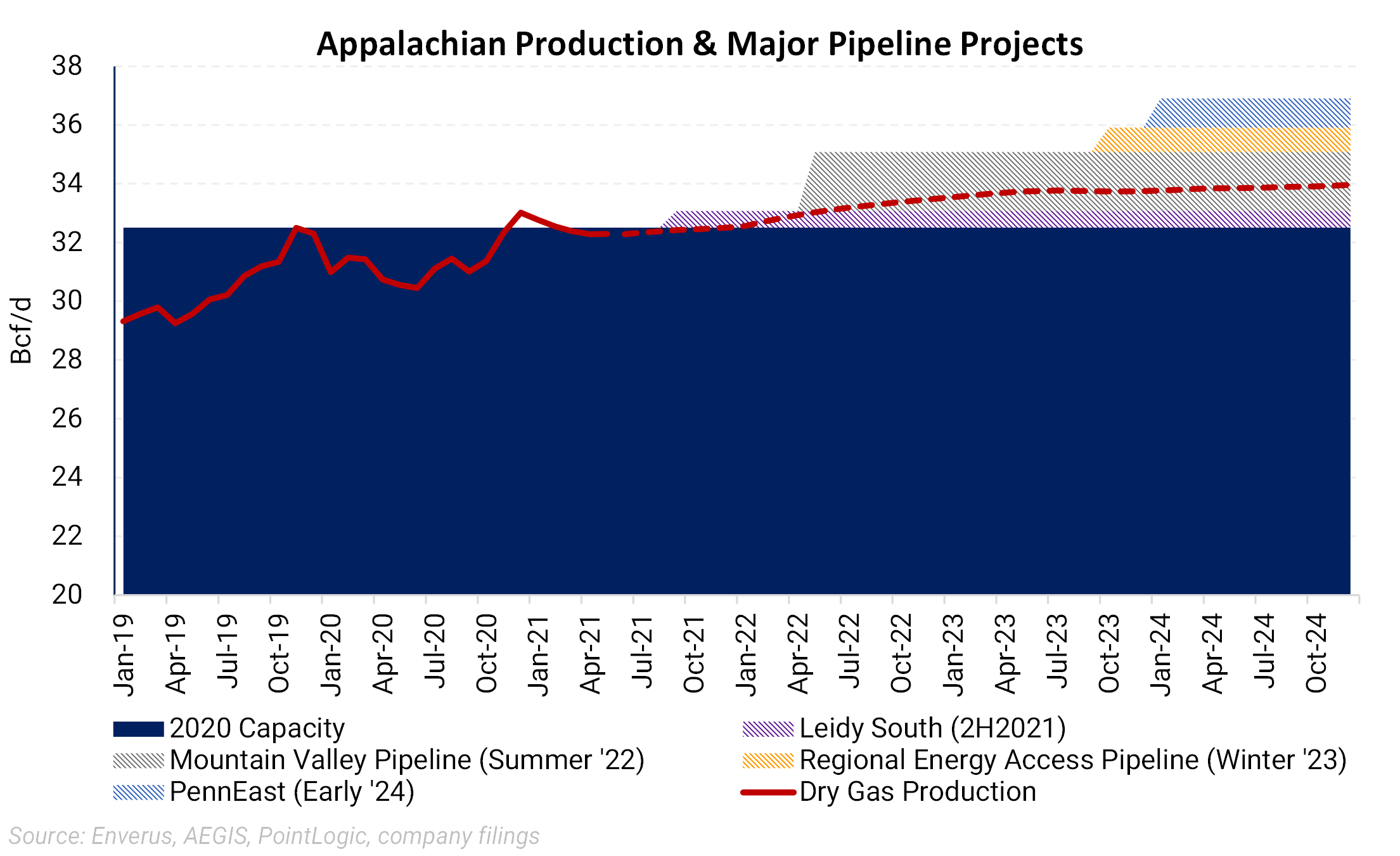 The in-service dates for the pipelines in the chart above were compiled using each company's investor presentations.

The main pipeline that was supposed to bring additional capacity, the Mountain Valley Pipeline, is not expected to come online until at least Summer '22. Some analysts have questioned the proposed timeline for the pipeline and doubt it will be in service by Summer '22.

The Appalachian basin's S&D balance has weakened over the last two years as supply growth has outpaced the growth of demand, which explains the weakening differential. Infrastructure delays are the primary reason demand has been outpaced by supply.  Infrastructure is getting more difficult to build, lawsuits and regulations are making projects more expensive. The basin will need additional egress capacity or a decline in production to improve local basis prices. 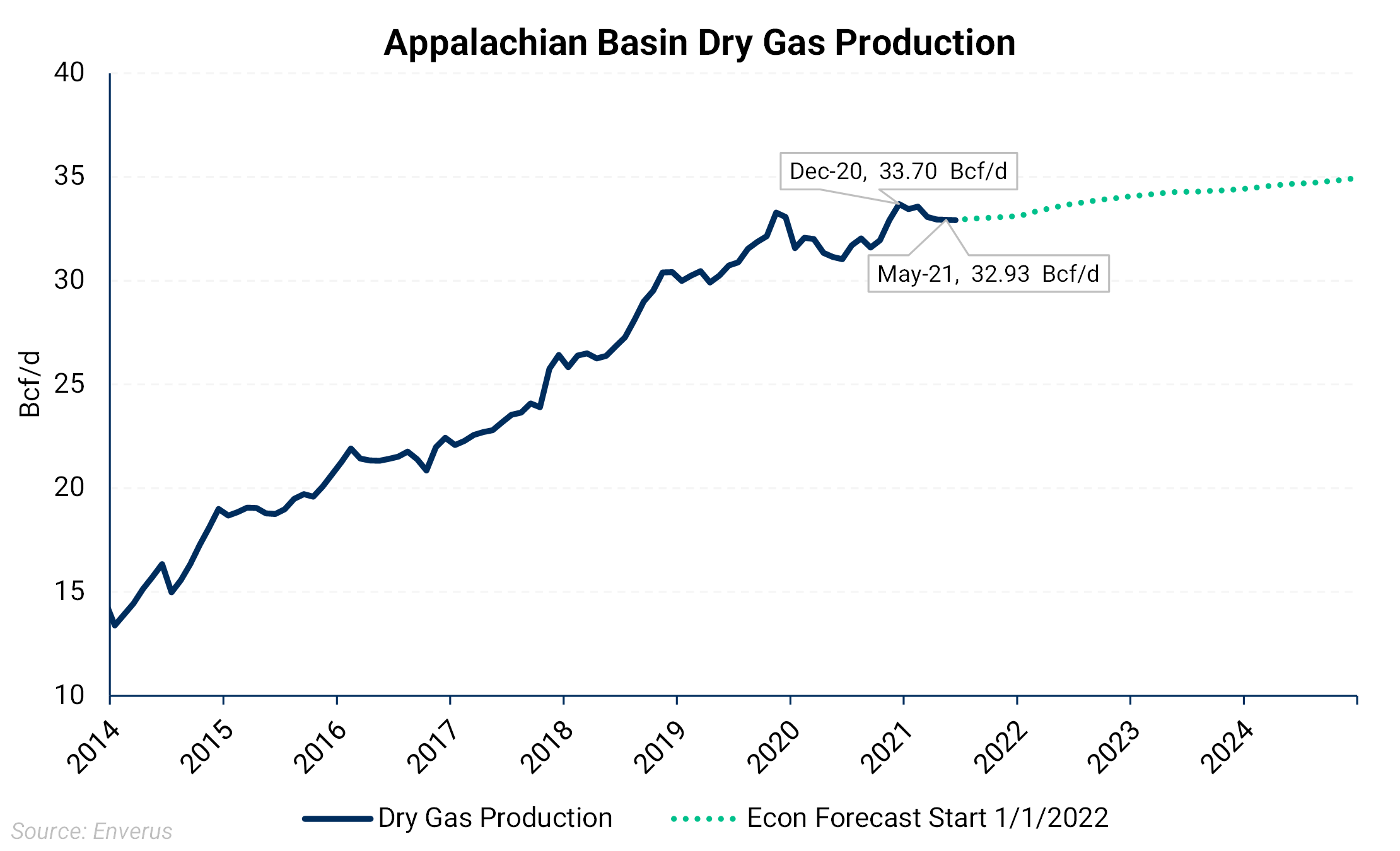 The Northeast region is responsible for nearly a third of the country's dry gas production. The region has undergone tremendous growth since 2014, though it has slowed in the last two years.

Production has increased by 20 Bcf/d since 2014, reaching a record high of 33.70 Bcf/d in December 2020, with much of the new supply leaving on outbound pipes.  Production is not expected to grow in the near term due to constrained egress capacity.

In the absence of additional takeaway capacity, production growth will be limited. Drilling and completion activity in the Appalachian basin is down, explaining why output is expected to remain steady or even decline. Gas-directed drilling rigs active in the Appalachia region have averaged around 37 in 2021, nearly half the annual average of 70 in 2019, Baker Hughes data shows.

The chart below details the changes to the Appalachian gas market over the last several years. Flows to the Midwest and Southern corridors have increased substantially, so much that legacy pipelines that used to flow gas from the Gulf Coast to the Northeast have now reversed to take gas in the opposite direction. 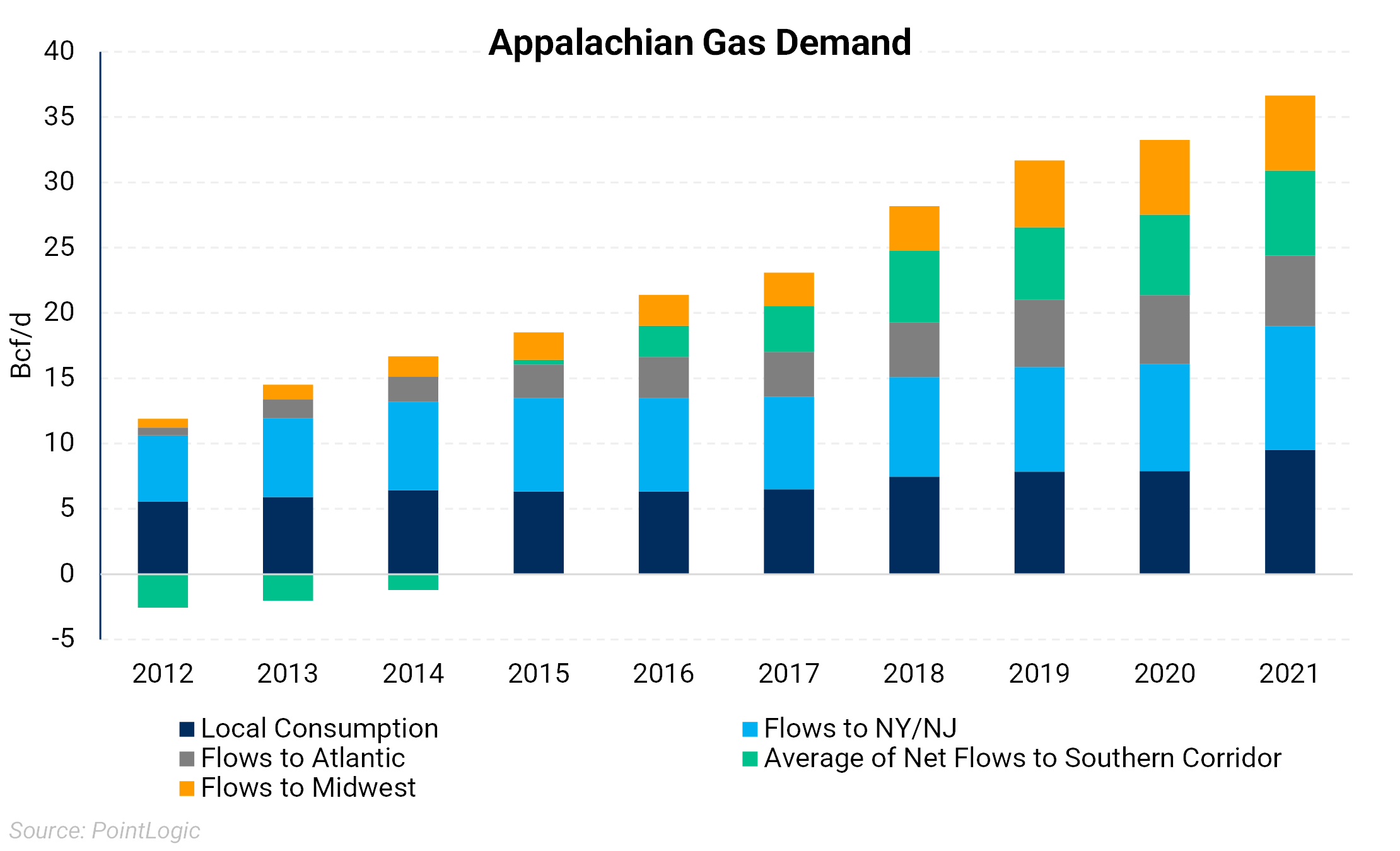 Total local consumption (excl. NY/NJ) ranges from around 5.6 Bcf/d during the shoulder season up to 11 Bcf/d during the peak-demand months. Local consumption averaged a record-high of 12 Bcf/d in February 2021. Appalachian consumption has continued to grow over the last few years, though its growth has been outpaced by supply which has caused gas to have to find ways to other markets. When the winter cold fades and in-basin demand falls, gas has to be discounted further to leave the region.

Residential and Commercial (ResComm) demand accounts for the largest portion of local consumption. ResComm consumption increases during the winter, when heating demand spikes. During the peak of winter, ResComm demand reaches up to 6 Bcf/d but falls to less than 1 Bcf/d during the summer months. Gas flows to NY/NJ are prone to seasonality and behave like local consumption. During off-peak months, around 6.3 Bcf/d of gas will flow to NY/NJ to meet demand, but when winter weather approaches, the number ramps up to about 10 Bcf/d.

Between flows to NY/NJ and local consumption, the basin lost around 9 Bcf/d of demand during its off-peak months in 2020, which is why the basin becomes particularly strained during the summer season. That gas has to find somewhere else to go, and many of the outbound pipes run at near capacity year-round.

Mountain Valley Pipeline – U.S. pipeline company Equitrans Midstream Corp said on May 4, the Mountain Valley natural gas pipeline startup has been delayed to the summer of 2022.

The Mountain Valley Pipeline (MVP) project is a natural gas pipeline system that spans approximately 303 miles from northwestern West Virginia to southern Virginia, and will bring nearly 2 Bcf/d of takeaway capacity from the Appalachian basin to the mid-Atlantic markets. The pipeline has faced numerous court challenges throughout the life of the project, which is why the project is now two years beyond the original in-service date of 4Q2018.

Leidy South Expansion (Transco) – The Leidy South Expansion project will bring 580 MMcf/d  of capacity to help meet growing demand in the Res/Comm and Power sectors in the Mid-Atlantic and Southeast. The project is expected to be fully in-service by 4Q2021, though 125 MMcf/d is already flowing through the pipe.