The Federal Open Market Committee (“FOMC”) met Wednesday and left the federal funds rate target unchanged in its 0% - 0.25% range, as was expected. However, in a more conservative (or hawkish) tone, the Fed also noted in its statement that a moderation in the pace of asset purchases (i.e., tapering) "may soon be warranted.” Furthermore, the term “transitory” regarding inflation was used much less often across all the comments made by both parties. Federal Reserve Chairman Jerome Powell noted in his comments that tapering could start as soon as the next meeting and could end in the middle of next year. Powell also responded in his Q&A session that the Fed will wait until tapering is finished before raising rates as it would be unreasonable to have both accommodative and tightening policies running concurrently.

Many market pundits took the FOMC and the Fed Chair’s comments to imply that tapering will be approved and commence after the next FOMC meeting in November, start early in December, and take about six months to wind down to zero excess asset purchases, or by the end of Q2 next year. This would then clear the deck for the next step by the Fed of drying up its accommodative stance and start lifting short-term rates off from their near 0% levels.

The update to the Fed's dot plot and economic projections was perhaps the most interesting takeaway from the meeting. The FOMC is now equally split regarding a rate hike in 2022 (nine members still see no rate hike by the end of next year, and nine members see one or two rate hikes by the end of next year), putting the median at 0.25% for 2022. The Fed is then projecting three rate hikes in 2023 (median at 1.00%) and another three hikes in 2024 (median at 1.75%). The September meeting’s dots now show more hikes projected by the end of 2023 compared June’s previous forecast: 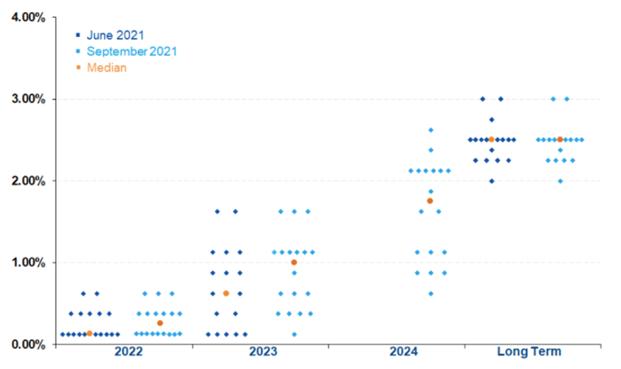 Initially, the bond market reaction was yield curve flattening. Despite the move forward of the timing of some of the federal funds forecasts (as denoted by the dot plot) and the higher inflation outlook for 2022 (and perhaps because of the lower GDP growth outlook for 2021), long-end yields were down on the day by 2-4 bps (0.02% to 0.04%), while shorter-term rates rose slightly by 2-3 bps (0.02% to 0.035) on the prospect of the eventual lifting of the current federal funds rate occurring sooner than previously projected by the Fed.

However, by the end of the week, the bond market saw a sell-off (in prices) which means rising yields. By the end of the week as the market had a few days to further digest the FOMC and Fed Chair Powell’s remarks, investors sold off the ten-year Treasury yield to raise its yield up roughly 11 bps (0.11%) for the week, from 1.35% to 1.46%: 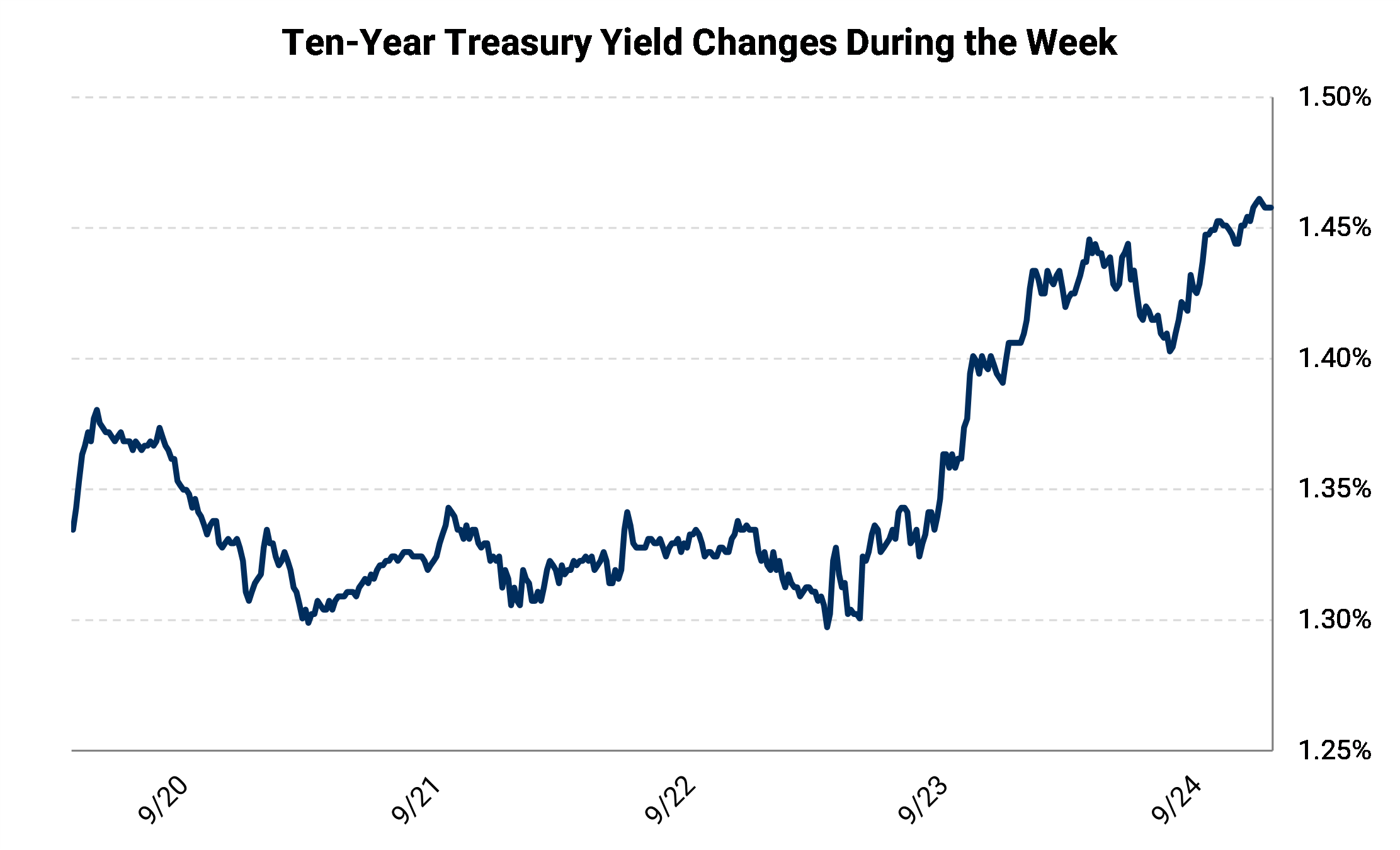 At the conclusion of Powell’s Q&A remarks, he firmly stated that the debt ceiling unequivocally must be raised, refusing to even entertain the thought of the U.S. not paying its bills, including interest expense on its debt.

The Senate is set to vote Monday on a motion to advance a temporary government funding bill that includes a suspension of the debt ceiling. Republicans are still planning to block the bill because of the debt ceiling provision, which they oppose. If they do and the bill fails, Democrats have two options to address the possible shutdown looming at the end of the month: They could remove the debt ceiling provision from the bill and pass it with GOP support, or they could just let the government go unfunded and blame their colleagues across the aisle.

A reminder of the timeline here: Government funding runs out at midnight on September 30. The government will reach its borrowing limit in mid-October, which could trigger a first-ever US default.

Housing remains strong across the board

U.S. housing starts rose by more than expected in August, driven by multifamily projects, though backlogs continued to weigh on construction. Multifamily starts -- which tend to be volatile and include apartment buildings and condominiums -- increased 20.6% to 539,000. Single-family starts decreased for a second month to an annualized pace of 1.08 million units.

The data suggest that builders continue to struggle with limited availability of land, labor, and materials, which has slowed residential starts from a 15-year high in March. Despite the bottlenecks, housing starts remain mostly above pre-pandemic levels, which is expected to keep construction activity elevated for some time. 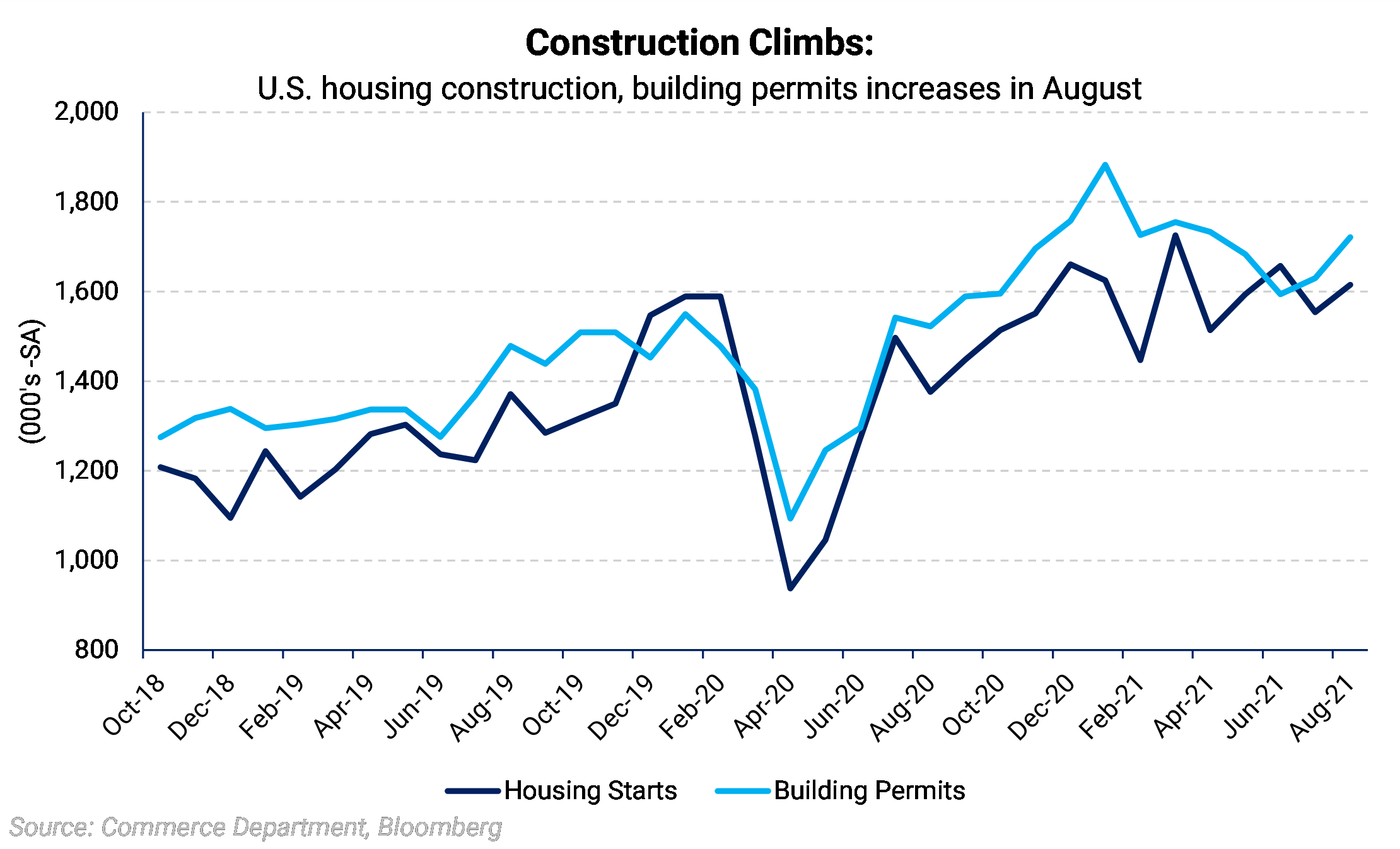 Sales of new U.S. homes rose in August by more than forecast, reaching a four-month high and suggesting demand is stabilizing as builders make gradual headway on backlogs. The median new home price in the U.S. remains at $390,900: 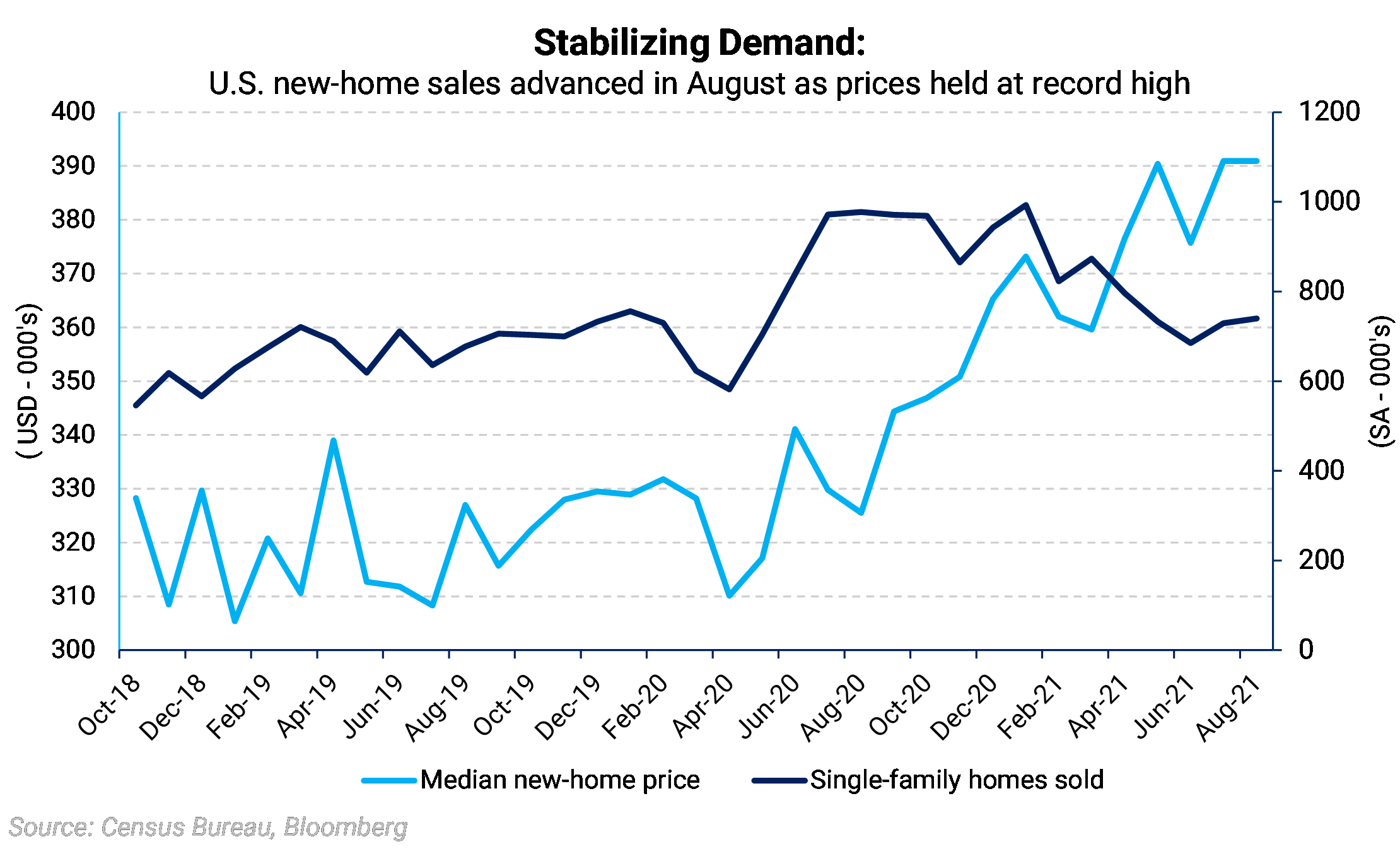