Natural gas withdrawals, which typically begin in mid-November in the U.S., are likely to begin about two weeks early this year.

Implied daily gas-storage changes over the past week have shown a net pull on storage, according to Platts. This comes amid a cold front sweeping across the U.S., coupled with lower production and strong LNG demand. Weekly storage changes, as reported by the EIA are shown in the chart below. Peak storage levels are usually observed near November 15, but this year we could see gas withdrawals for the gas weeks ending October 30 and November 6. The week of October 30, which is the current gas week, is estimated to pull about 19 Bcf from total storage, according to Platts. If the estimate holds, it would be the earliest weekly withdrawal since 2006. 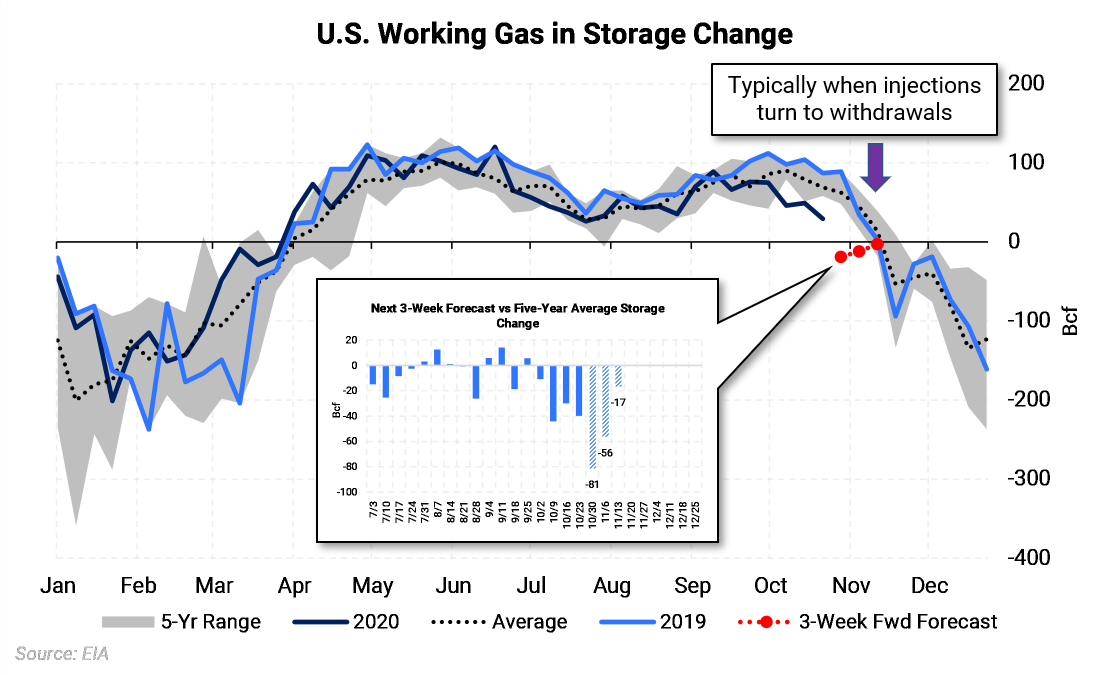 The smaller inset chart above represents how bullish the next three weeks could be compared to the five-year average weekly change. A supposed withdrawal of 19 Bcf for this week (reporting will occur on November 5) would be 81 Bcf lower than what is typical for that corresponding week in the past five years. There are a combination of factors causing the early gas withdrawal.

First, gas production has recently nosedived due to Hurricane Zeta and freeze-offs. The Gulf of Mexico's production fell from 2 Bcf/d to 0.5 Bcf/d as Zeta neared landfall. Texas, New Mexico, and the Rockies output all dropped due to freezing temperatures. All of these volumes should return rather quickly, but outages helped reduce Lower 48 daily gas production from near 89 Bcf/d to a low of about 85 Bcf/d, according to Bloomberg data.