Below, we keep a running list of OPEC developments and online resources. This effort began in September 2022, so items before that date may not be included, even if they are relevant for understanding the current situation.

September 29, 2022 - (Last Updated - January 3, 2023) OPEC+ is a loosely affiliated entity consisting of thirteen OPEC members and ten of the world's major non-OPEC oil-exporting nations. The group produces about 40% of the world's crude oil. The cartel is struggling to meet its quota, and the group's undersupply continues to worsen each month.

The chart below shows the OPEC nations' cumulative historical production volumes and their respective quotas for each month. The red font indicates the volume by which the bloc has fallen short of its quotas. 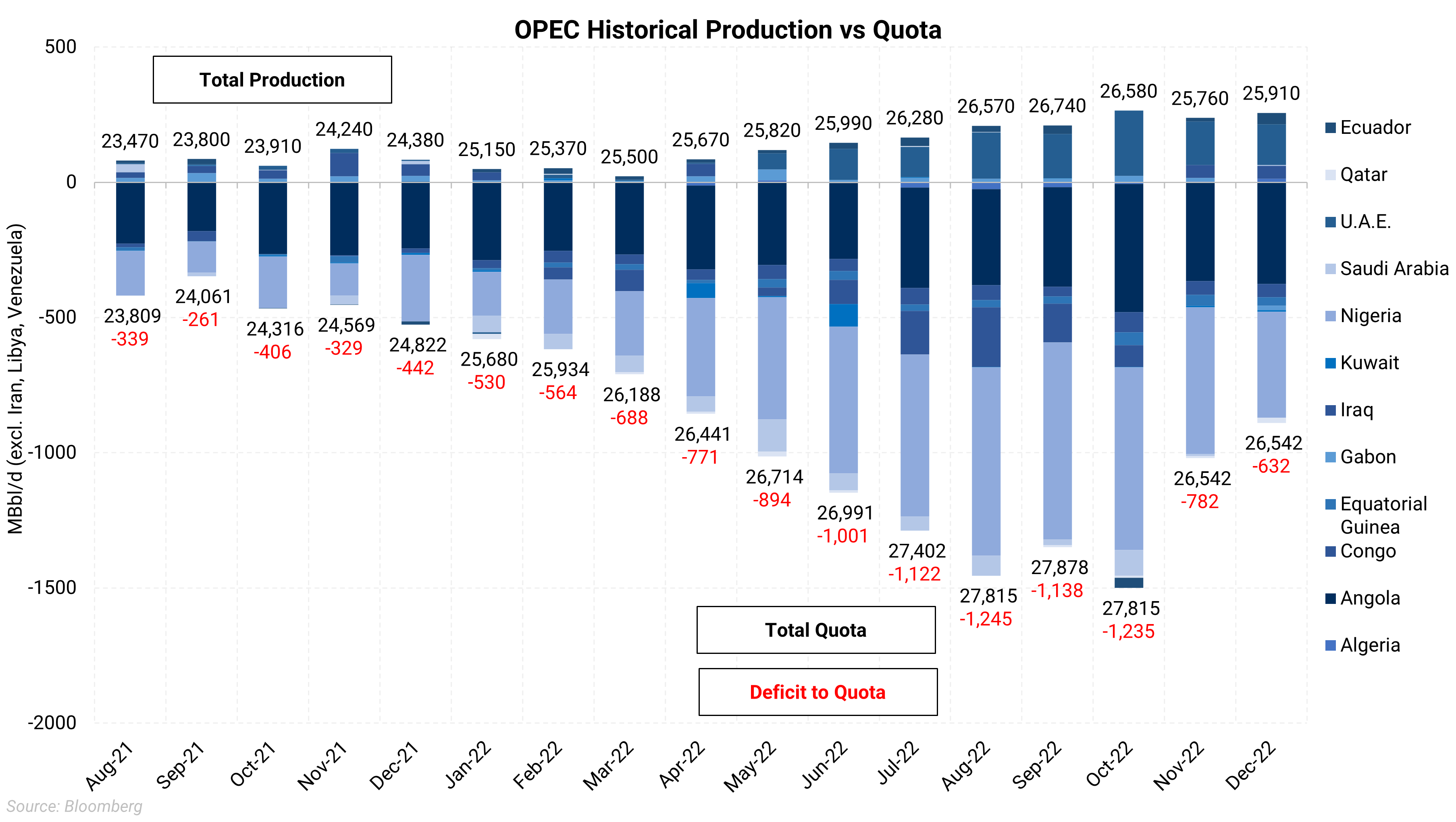 The cartel pumped 0.744 MMBbl/d less than its November collective production target of 42 MMBbl/d, according to Bloomberg. The production shortfall was mostly caused by declining output in sanctions-hit Russia and persistent production issues in Nigeria, Angola, and some other nations.

At the same time, the oil-producing group's so-called spare capacity, or the difference between what it is currently pumping and the level it can increase to, is also shrinking. Only two OPEC producers, Saudi Arabia and the UAE have the spare capacity. This week, Saudis acknowledged that the spare capacity would be erased by the next economic recovery.

Amin Nasser, CEO of Saudi Aramco, said this week (September 20, 2022) that "Oil inventories are low, and effective global spare capacity is now about one and a half percent of global demand."

Recent developments and items to watch:

Because of its dominant market position (40% of global oil production), OPEC+ often behaved as a cartel, coordinating production levels among members to control global oil prices. The bloc led by Saudi Arabia signaled the possibility of output cuts in August to address what the group sees as exaggerated oil price declines in the market. 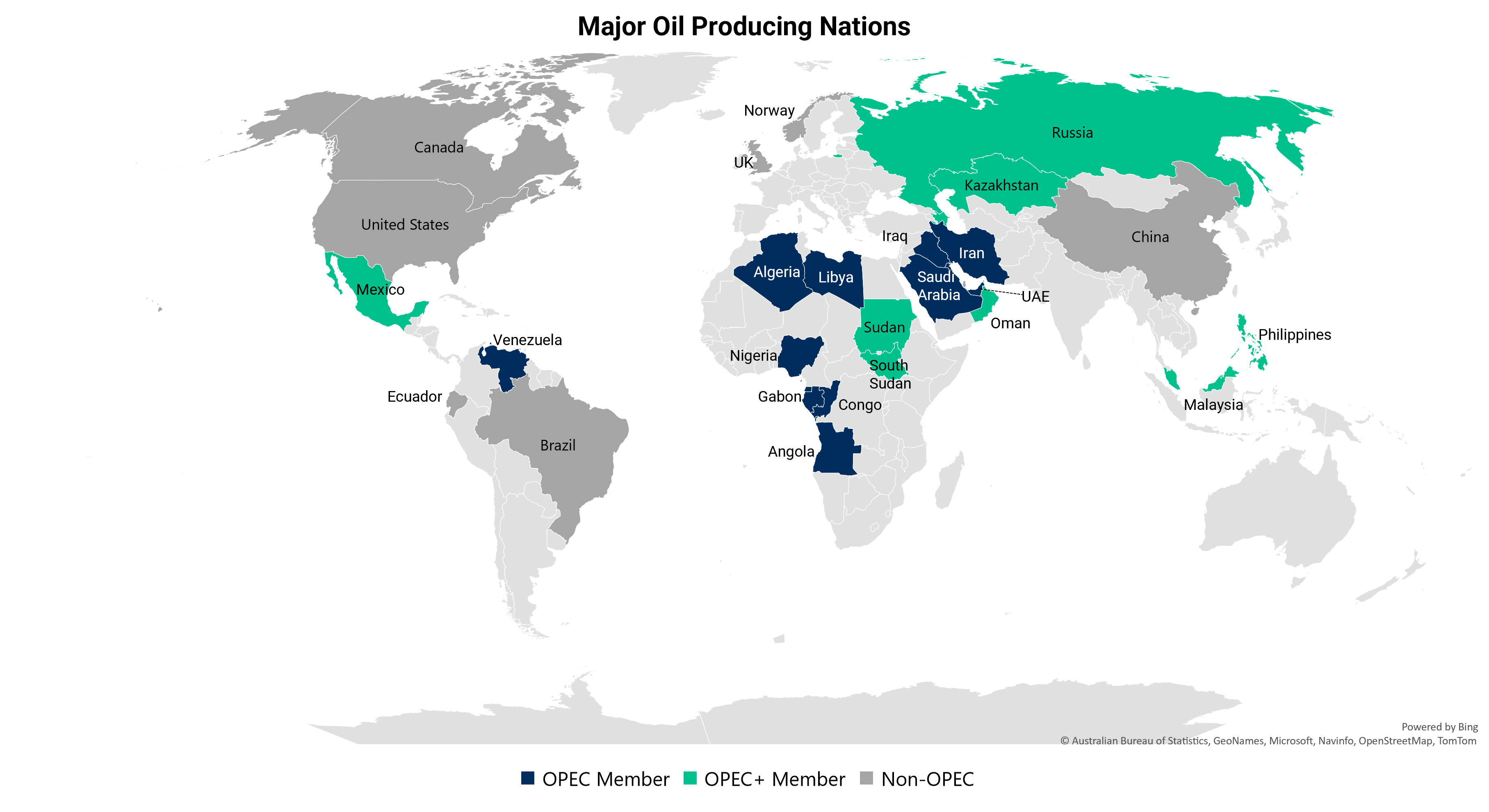 Core OPEC is a bloc of thirteen oil-rich countries concentrated in the Middle East and Africa. The majority of OPEC nations' production is controlled by their respective national oil companies (NOCs), which make production decisions in accordance with central coordination. In contrast to OPEC, producers in non-OPEC nations (U.S., Brazil, Canada, etc) are investor-owned companies (IOCs) that primarily operate on increasing shareholder value and make investment decisions based on economic factors.

Thirteen non-OPEC nations (Russia, Mexico, Oman, etc.) joined OPEC in 2001 to form the OPEC+ alliance. Since then, the group has produced with the aim of managing the oil supply in an effort to steer the price of oil on the global market. Some of the key OPEC producers' current state of production are explained below. 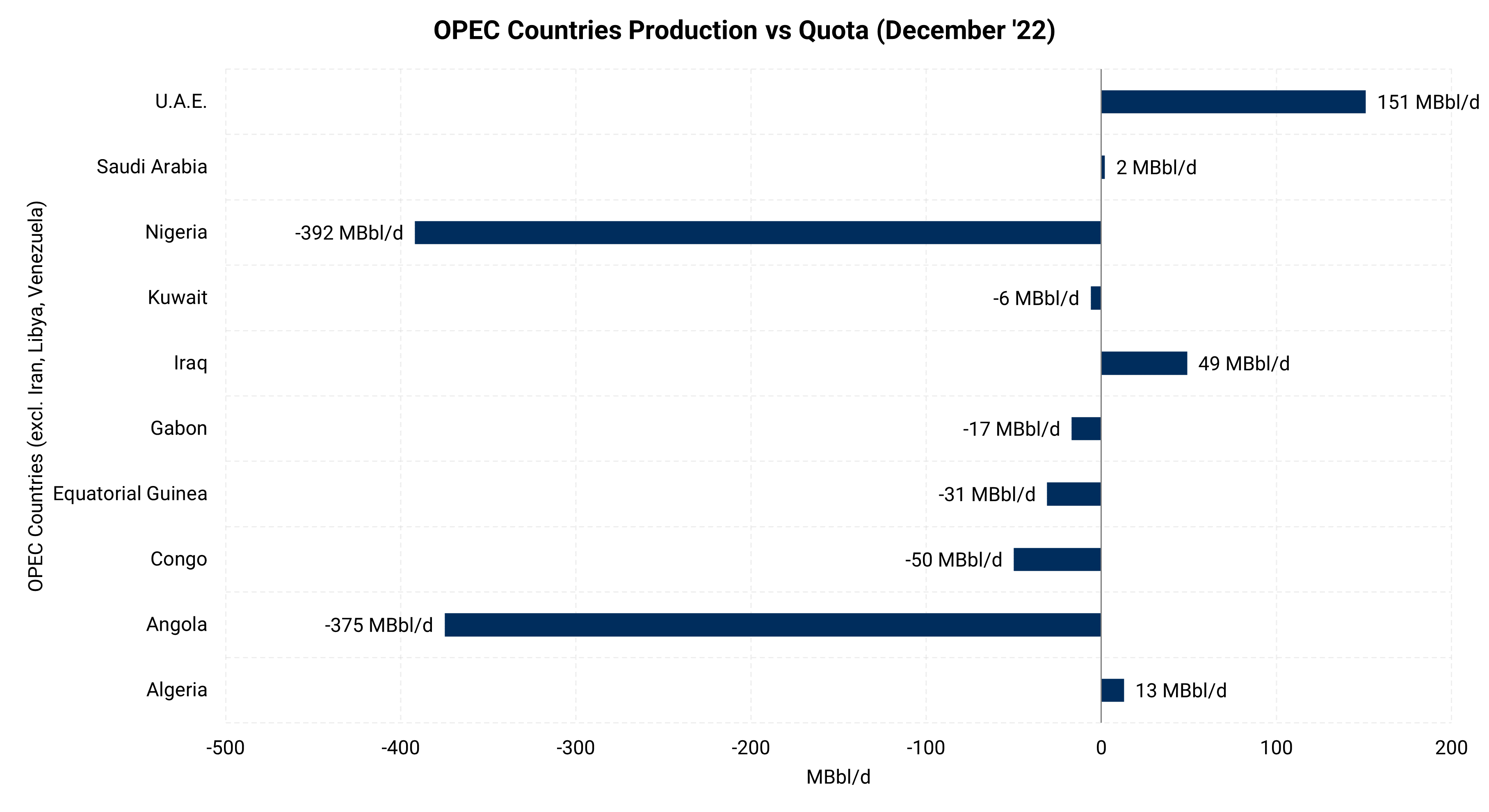 The above chart shows the difference in the production of each OPEC nation with their respective target quotas. The recurring theme is that most of the group's members have consistently underperformed due to various reasons, and the following explains the reasons and constraints faced by some of the key members of the cartel.

Nigeria - Africa's largest producer, has struggled to stabilize its production at around 1.5 MMBbl/d. Internal strife, especially in the Delta region, compounded by rampant theft from its pipelines and years of underinvestment, has pushed Nigeria's production numbers down to around 1.13 MMBbl/d. Nigeria currently pumps about 0.700 MMBbl/d below its OPEC quota.

Angola - Africa's third biggest producer, has also seen output plummet from close to 1.8 million b/d five years ago to 1.17 million b/d in August. Angola's crude output had sharply declined because of technical and operational issues in some fields, further exacerbated by a lack of upstream investment and incentives. Angola's oil production last hit these levels in 2006, when the country's offshore fields' output started ramping up. Angola has a quota of 1.565 MMBbl/d, and the nation produces nearly 0.355 MMBbl/d below its OPEC quota.

Saudi Arabia - Saudi is the leading producer among the selected OPEC nations and has a quota of 11 MMBbl/d. The nation has met this production goal twice in the past four years. While the 11 MMBbl/d production level has been reached in the past, maintaining it is difficult because of operational difficulties, regularly planned maintenance, and the necessity to provide the nation with enough fuel for power generation for summer.

The kingdom can only continue producing at a rate of 11 MMBbl/d or more with infrastructural expansion. The investment and project execution will take time and requires long-term, consistent capital investment. Officially, the country's "maximum sustainable capacity" is 12 MMBbl/d, and the current estimated spare capacity is expected to be about 1.0-1.5 MMBbl/d. Even if Saudi Arabia were eager to increase global supply, it would be challenging due to its limited additional ability to ramp up oil production.

However, Saudi Arabia's Energy Minister Salman said in May that the nation is on track to lift oil production capacity by more than 1 MMBbl/d to over 13 MMBbl/d by the end of 2026 or the start of 2027.

UAE - UAE's current production stands at 3.4 MMBbl/d, up about 13% from February 2022. The nation hit a peak output of 3.7 MMBbl/d In April 2020, when Saudi Arabia and Russia were engaged in a brief price war. Since the pandemic, production has increased by 0.500 MMBbl/d, from 2.85 MMBbl/d to the current 3.4 MMBbl/d. Historical production data indicates that the nation could again reach 3.5–4.0 MMBbl/d and, as a result, add 0.5–1.0 MMBbl/d to the global market – provided this plateau can be maintained. UAE's state-owned ADNOC expects to be able to increase production to 5 MMBbl/d by 2025.

Iraqi production usually fluctuates due to political turmoil or security issues in the southern part of the country, where the majority of the country's production is located, and in the Kurdistan region—where pipelines export the pumped oil via Turkey to the Mediterranean.

Iran - Iran produced 3.63 MMBbl/d on average under the Joint Comprehensive Plan of Action (JCPOA) or the Iranian nuclear deal, which was in effect from January 2016 until the Donald Trump administration withdrew from the agreement in May 2018. Iran's oil exports were subject to sanctions after the U.S. withdrew from the JCPOA, and production fell to an average of 2.48 MMBbl/d.

According to OPEC data, the current production is 2.52 MMBbl/d. If an agreement is reached on the nuclear deal and the sanctions on oil exports are eased, Iran could boost output by up to 1 MMBbl/d to its full capacity of about 3.7 MMBbl/d.

According to the most recent information, the deal is at an impasse after much back and forth between the U.S. and Iran. There are still reports that negotiations are ongoing, and it is unclear when a deal might be reached.

Note: Libya, Iran, and Venezuela are exempt from a quota under the OPEC+ deal.

For additional information on other nations, please use EIA's, International Page.