Saudi Arabia plans to unwind 1 MMBbl/d of supply cuts starting in April.* The action would end the 1 MMBbl/d of unilateral curtailments the country announced in early January for February and March. Since January 5, global oil prices have risen over 25% to $64.34/Bbl (through February 17). OPEC and its allies have been restricting output since the spring of 2020 when oil prices plunged and the global COVID-19 pandemic devastated petroleum demand. But now, withs supply curtailments and some demand recovery, the oil market has less daily supply than demand, according to Bloomberg. Global stockpiles have descended from record highs observed last year.

Because of the estimated undersupply, the market should be able to absorb the additional barrels from Saudi Arabia in April. If demand continues to improve, the oil market likely needs those barrels if non-OPEC supply (of which the largest contributor is the U.S.) does not rise. "We are in a much better place than we were a year ago, but I must warn, once again, against complacency," Prince Abdulaziz bin Salman, the Saudi energy minister, said at a conference on February 17, according to the Wall Street Journal

The chart below shows the OECD countries forecasted and actual liquids stocks, which have been reduced since summer 2020. Supply reductions have help move global inventories into a healthier posture. 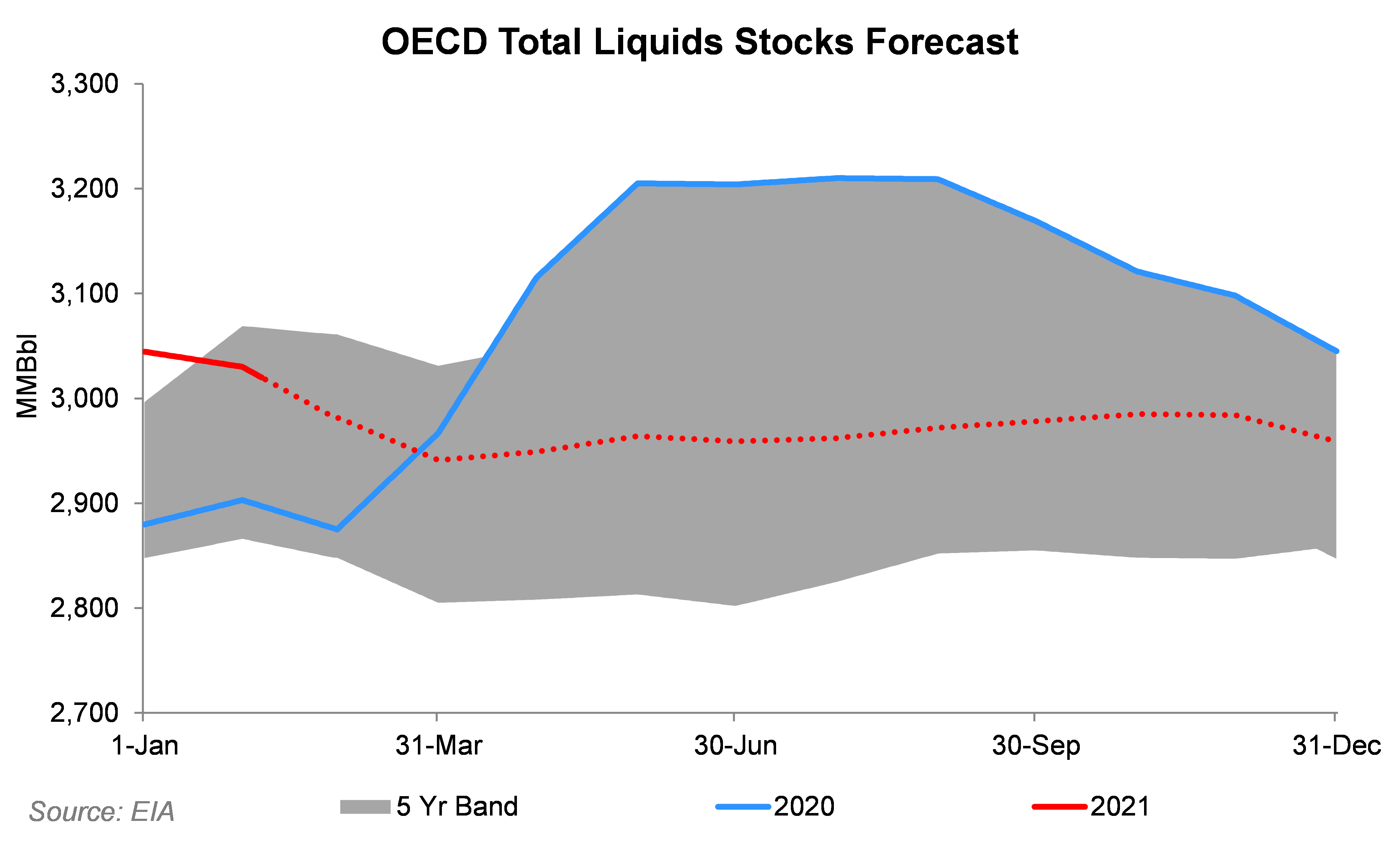 The shape of the major oil curves reflects the destocking. When Saudi Arabia announced it would cut an additional 1 MMBbl/d the Brent curve was only slightly backwardated, implying a rather balanced market with only slightly more demand in the physical market than in the future. Now in mid-February, the Brent curve is much more backwardated with nearly $5/Bbl difference between the prompt-month contract and the December 2021 contract. The continued improvement in demand, but mostly the extra supply reduction from the Saudis, created a greater need to have barrels in the near-term than in the future. A steeper downward slope in the oil curve implies undersupply in the fundamentals.

Ja. 5 - Saudi Arabia announces 1 MMBbl/d unilateral supply cut
In addition to the Saudis returning supply, the broader OPEC+ group meets on March 4 to discuss the group's current restrictions. Some analysts believe the group will keep its quotas steady and not make any material changes, according to the WSJ. However, the cartel could see the need for more barrels, depending on their view of demand recovery. If both Saudi Arabia and OPEC+ relax production quotas, oil's current state of undersupply could be undone.