After a very lackluster beginning to the week with a dearth of economic reports or political actions that move the fixed income markets, Treasury yields and interest rate swap levels traded within a narrow range.

At the end of the week, however, a set of employment-related data helped push yields up on their unexpectedly higher than forecasted results.

The U.S. labor-market rebound extended for a fourth month in August, offering hope that the economy can continue to recover despite a persistent pandemic and Washington’s standoff over further government aid to jobless Americans and small businesses.

According to a Labor Department report Friday, nonfarm payrolls increased by 1.37 million, including the hiring of 238,000 temporary Census workers. The unemployment rate fell more than expected, by almost two percentage points, to 8.4%: 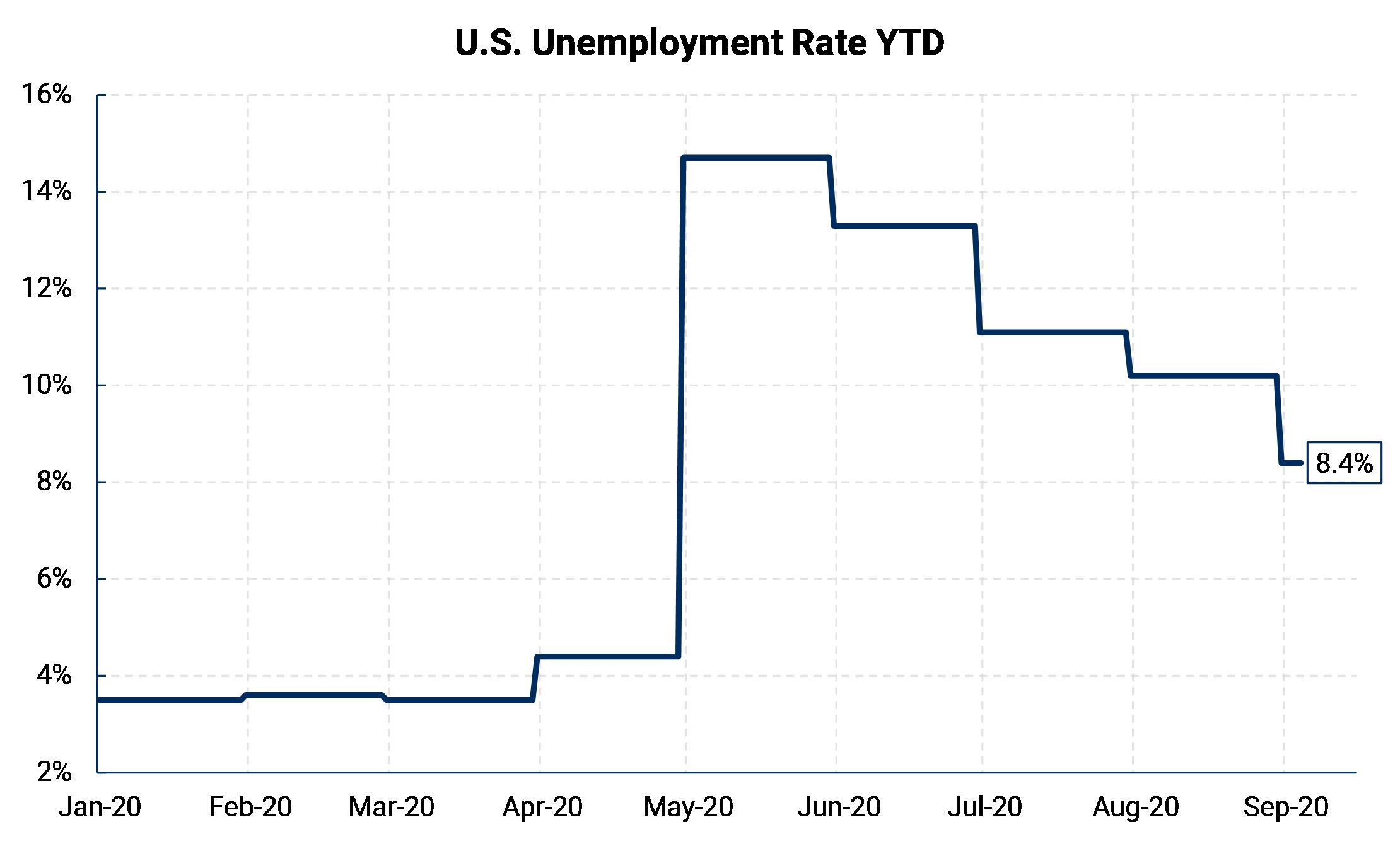 The U.S. dollar and Treasury yields climbed after the report, with Treasury and swap yields increasing by two to ten basis points (0.02% to 0.10%) across their respective curves.

This data signals that progress in the labor market continues at a more moderate pace since the initial bounce back in hiring, with payrolls remaining about 11.5 million below the pre-pandemic level. The rate of further gains likely hinges on whether America improves control of coronavirus infections and an end to the stalemate in Congress over another stimulus package.

The drop in the unemployment rate to single digits, with two months before the November election, could boost President Donald Trump. He has often polled better than Democratic opponent Joe Biden on economic issues and is counting on such sentiment to help him win a second term.

One troubling figure from the report is the number of permanent job losses rose by more than half a million to 3.41 million, after being little changed in July. This is an area of deep concern to the Fed and was a key driver in motivating them to change policy last week.

The report also showed that average hourly earnings rose by 0.4% from the prior month and were up 4.7% from a year ago, though this figure has been volatile throughout the pandemic given the wide-scale payroll losses and gains.

Initial jobless claims came in at a seasonally adjusted 881,000 for the week ended August 29th. This is well below the 1 million level that claims have been hovering around and below the median market forecast for a claims result of 950,000. However, this data is not directly comparable to the previous week’s reading due to new changes in the methodology of seasonal adjustments for this report.

Apart from the switch in the seasonal adjustment methodology, jobless claims may lose their predictive power in the future, resulting in a sizeable indicative loss for the market and the Fed. By the end of September, the number of Americans receiving jobless benefits will start to decline faster – not due to an employment recovery necessarily, but rather due to the expiration of insurance benefits.

Unadjusted continuing claims fell by about 765,000 to 13.1 million, though this could reflect some people who exhausted regular state benefits and moved to separate extended programs.

More broadly, this data points to a slow and uneven improvement in a still depressed labor market. On Wednesday, United Airlines Holdings Inc. and Ford Motor Co. announced layoffs, adding to news of hundreds of thousands of job cuts or buyouts from major companies in recent weeks. New COVID-19 infections still number in the hundreds of thousands a week, a figure that, while lower than in July, indicates that it will be a while before Americans return in larger numbers to public activities and consumption, such as traveling and eating out. There are also signs of new outbreaks emerging in some states, particularly in the Midwest.

Additionally, a separate report Thursday from the Institute for Supply Management showed monthly jobs in service industries falling at a slower pace in August.

The course of the economic recovery in the U.S. will “critically depend on receiving substantial additional support from fiscal policy,” Federal Reserve Bank of Chicago President Charles Evans said in remarks Thursday prepared for a virtual event hosted by the Lakeshore Chamber of Commerce in northwest Indiana. “A lack of action or an inadequate one presents a very significant downside risk to the economy today.”

The Republican Senate Majority Leader Mitch McConnell expressed doubts Wednesday as to whether lawmakers would be able to reach a deal on additional pandemic relief in the next few weeks. The Chicago Fed chief gave a pessimistic view of the road ahead for the economy, even assuming a deal, suggesting that periodic coronavirus outbreaks around the country would damp consumer spending until a vaccine becomes available.

Federal Reserve Chairman Jerome Powell unveiled a new strategy for setting interest rates during an annual economic symposium last week on August 27th. Going forward, the U.S. central bank will allow the inflation rate to rise above its 2% target following periods of below-target inflation with an aim toward averaging 2% over time. That means waiting longer to tighten monetary policy as inflation rises than in the past.

Investors are on the lookout to see whether Chairman Powell and his Fed colleagues will update that guidance to reflect the new strategy at their upcoming September 15th-16th FOMC policy meeting. Articulating outcome-based forward guidance for their rate path and asset purchases would benefit the markets that thrive on certainty.

When the central bank does eventually tighten, it will need to push the unemployment rate up to keep inflation under control. This means the Fed will likely have to raise interest rates faster and higher. The good news is that higher interest rate peaks will give the Fed more room to fight future recessions. The bad news is that the need for sufficient tightening to push up the unemployment rate will increase the risk of future recessions.

The Fed’s new policies will be helpful down the road in keeping inflation expectations well anchored. But their new policy won’t do much currently to support household and business incomes. For that, Americans need to look to Congress and the White House for further fiscal stimulus.

U.S. trade deficit in July swelled to its biggest gap since 2008

The U.S. trade deficit swelled to its widest level in 12 years in July, with the surplus on services plunging to it’s lowest level since 2012, pointing to a bumpy economic recovery ahead.

According to Commerce Department data released Thursday, the overall gap of goods and services expanded to $63.6 billion in July from a revised $53.5 billion in June. Together, the value of U.S. exports and imports rose to $399.8 billion, still well below pre-pandemic levels.

The widening in the trade deficit in July after narrowing the prior month shows that the U.S. economic recovery will come in fits and starts. Trade volumes are higher than May’s pandemic lows but unfortunately remain depressed following the initial uptick from reopening measures.

We continue to monitor oil, gas, NGLs, regional markets, jet fuel, and interest rates for hedging opportunities. To learn more and see AEGIS opinion and recommendations, go to AEGIS View publications, or contact info@aegis-energy.com. Like what you see? Share this article with the button on the bottom right of your desktop. Market questions or comments? Contact us at view@aegis-energy.com.

Back to Press Homepage

Get actionable insights delivered straight to your Inbox every day!

View this quick demo to see how our hedge management platform transforms the way you research, manage, and trade.