In reaction, the benchmark ten-year Treasury yield fell during the week to an intraday low below 1.62% from its recent March month-end high of over 1.74%, with the yield curve flattening as the decline in long-term rates outpaced that of shorter-term maturities. Meanwhile, the U.S. Dollar Index ("DXY") dropped from an intraweek high of 93.111 to an intraweek low of 92.008. These levels are both below the recent DXY high at the end of March of 93.420.

In contrast to interest rates and the USD, the S&P 500 Index and the Dow Jones Industrial Average ("DJIA") set new record highs over the week, while the NASDAQ Composite as well as the NASDAQ 100 Index climbed back toward their mid-February record levels. 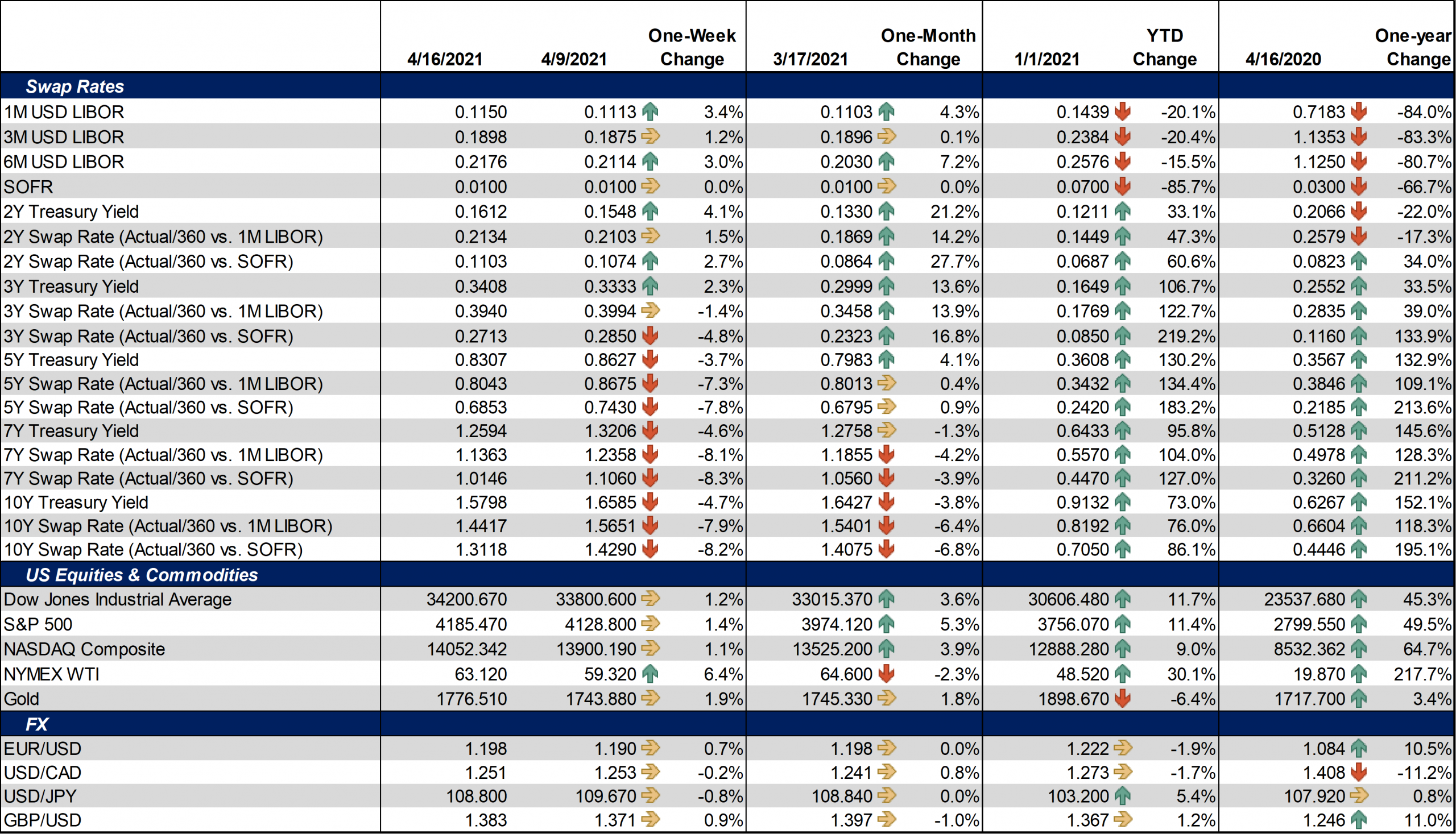 During a virtual International Monetary Fund panel this week, Fed Chair Powell played down the risk that inflation could get out of control as the pandemic recedes. Powell stated that "we just need to keep reminding ourselves that even though some parts of the economy are just doing great, there's a very large group of people who are not," and included, as an example, his personal commute home in Washington, D.C. that takes him past a "substantial tent city" which reinforces his significant concern over the millions of Americans who are still trying to get back to work.

Whether by innate personality or by unprecedented tragic economic conditions, or perhaps both, Jerome Powell, a registered Republican, is showing to be the most dovish Federal Reserve Chairperson in modern history.

Doubt continues to sway the markets

Despite Powell's and the Federal Reserves' repeated consolations that anticipated inflation will be temporary and combatable if proven to be otherwise, many market participants and economists continued to grow increasingly doubtful over the Fed's forecast. As well, there are concerns over the ability for the Fed to react in enough time such that inflation does not become a more permanent economic factor that will have to be met with increased interest rates, as well as other potential Fed tools.

Expectations for gross domestic product ("GDP") growth surged more than a percentage point to an annualized pace of 8.1% in the second quarter, according to the latest monthly survey of 71 economists by Bloomberg. One of the outlying economists surveyed forecasted second quarter GDP to reach 11.5%.

Consumer spending forecasts were raised for each quarter of the year, reflecting an outpouring of pent-up demand that is putting the nation on track for its strongest economic growth since 1984. The current unemployment rate of 6.0% is also expected to fall below 5% in the final three months of the year, according to the median forecast in this survey. By contrast, it took over six years for the jobless rate to reach that milestone in the wake of the Great 2007-09 Recession: 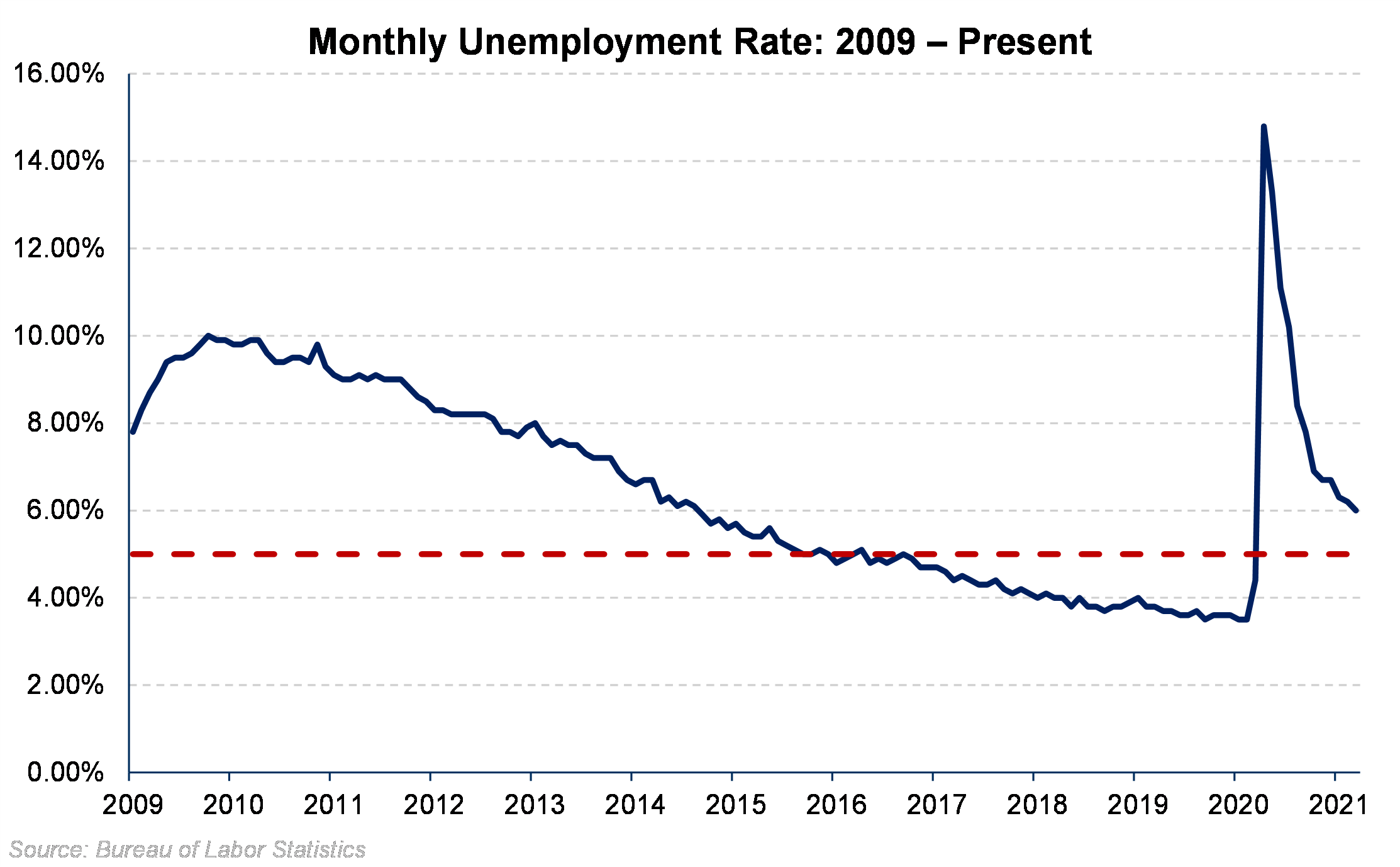 The rapid acceleration in activity in the second and third quarter is primarily being based on the combination of the speed and sheer numbers of vaccinations, the efficacy of those vaccinations, and record fiscal support in the pipeline, with even more to still come. An average of three million Americans are getting vaccinated each day, and states are increasingly rolling back business restrictions. California, the most populous state and the first state to impose severe lockdown restrictions last year, is allowing most establishments to partially or fully reopen this month.

At the same time, a slew of recent economic data, including last week's March jobs report, has come in much better than economists expected. This would also include this week's higher than expected producer price index ("PPI") report.

The Labor Department reported Friday that the wholesale U.S. producer price index jumped 1.0% last month, double the expected increase of 0.5%. For the past rolling 12 months, the PPI has increased by 4.2%, its largest year-on-year increase since September 2011. This follows a rise in February of 0.5%, which produced a 2.8% increase in February's year-on-year PPI rate. 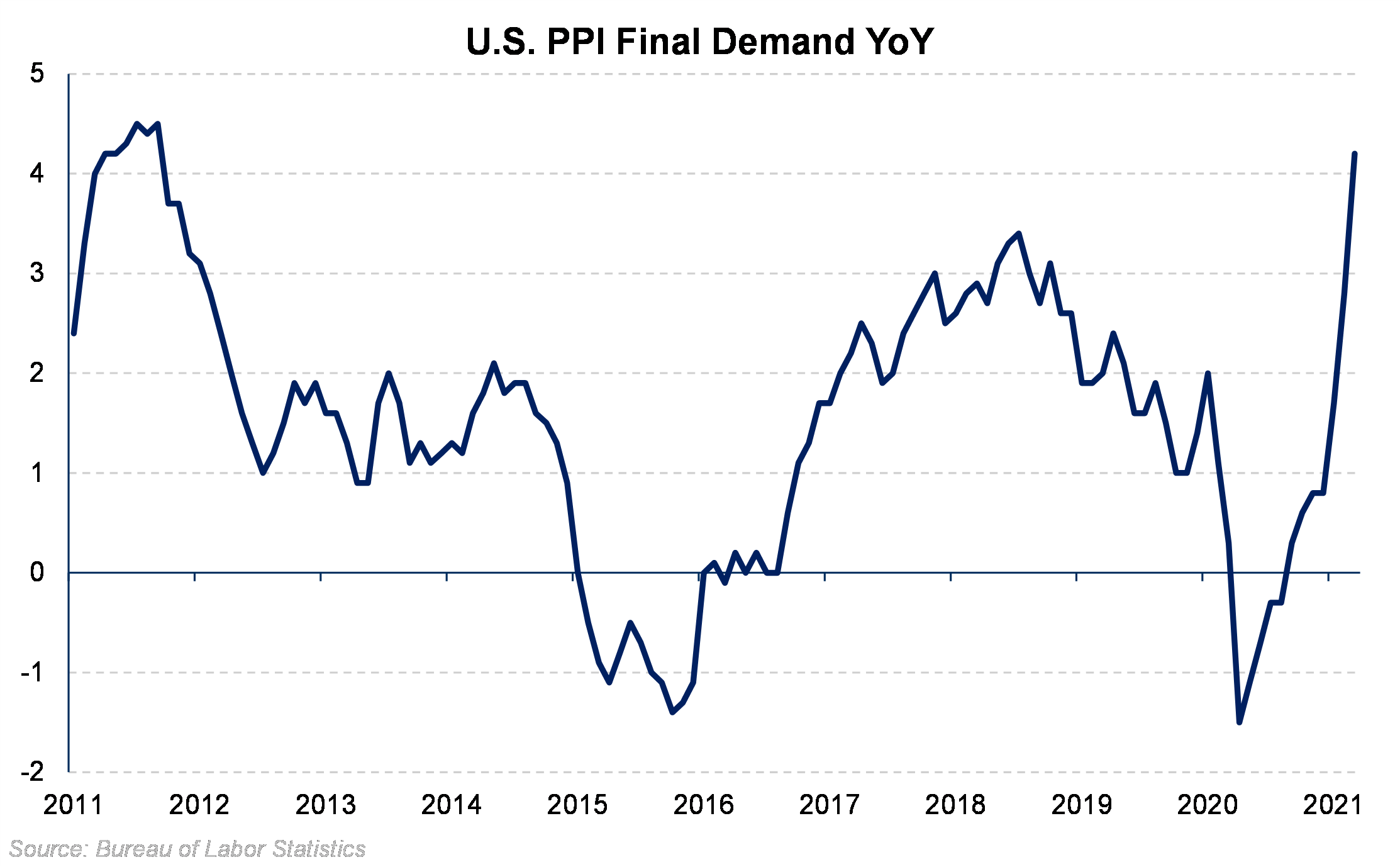 Contributing to the increase in March's wholesale price measurements, the cost of goods climbed 1.7%, fueled by an 8.8% spike in gasoline prices. Excluding volatile food and energy components, the often referred to "Core PPI", increased 0.7% from last month for a 3.1% increase on a year-on-year basis.

This report reflects the market's concern of higher inflation as the economy reopens amid the significant level of vaccinations and fiscal stimulus. Producer prices, which have high potential of being passed on to consumers, are clearly rising at a brisk pace. However, it is important to note, given the significant decline in inflation metrics at the start of the pandemic-induced economic collapse, year-over-year figures will quickly accelerate, a development referred to as the "base effect". Such an upward distortion is anticipated to appear in the March consumer price index ("CPI") report, due on Tuesday morning.

Wholesale prices are also being driven higher due to shortages of materials that have driven up input prices at the same time producers are contending with higher shipping costs and unique global bottlenecks. These types of contributors to increased producer prices are viewed by the Fed as delivering only a temporary boost to inflation. Fed Chair Powell, during the previously mentioned virtual panel, continued to reiterate that while price pressures are expected to continue to rise as the economy reopens, the pickup in inflation will likely be transient.

Bottom line with regard to hedging interest rates

The recent reprieve with the decline in interest rates may be an excellent opportunity to hedge future rising interest expense if indeed the Federal Reserve's forecasts develop to be incorrect and they indeed must raise short-term funding rates to combat inflation that proves to be more permanent than temporary, as many fixed income market players and analysts are predicting.

While longer-term Treasury yields, such as the bellwether ten-year Treasury yield, are more reflective of mortgage rates, most corporate hedgers are more concerned with shorter-term interest rate swap levels out to five years, which broke the 1.00% threshold (on an Actual/360 basis against one-month USD LIBOR) intraday earlier this week, but ended on Friday almost 14 basis points (0.14%) lower, nearing 0.86%, its lowest level since mid-March: 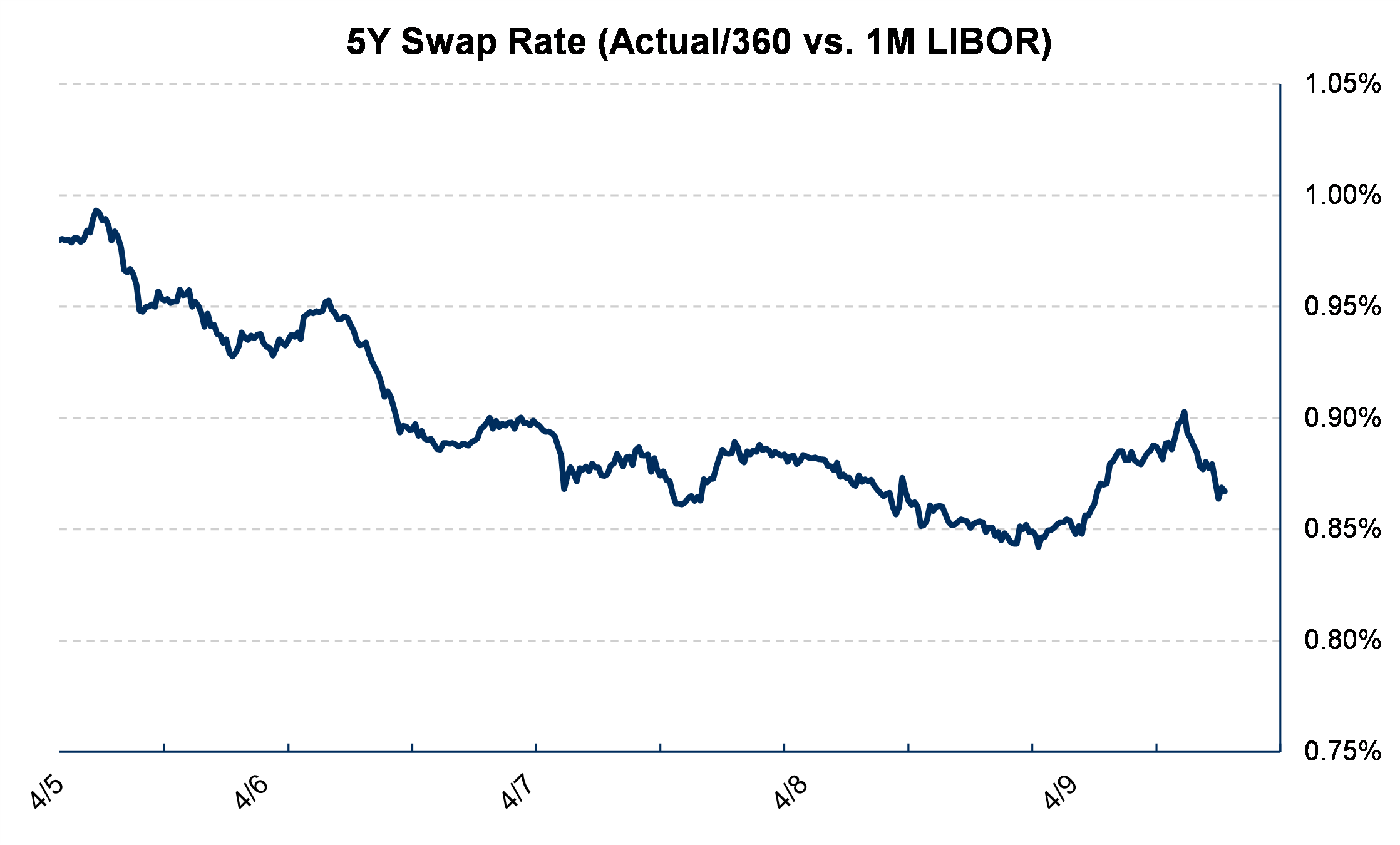