Several developments in the macroeconomic markets helped to shape a high level of volatility in the interest rate markets going back to the post-Thanksgiving holiday. Chiefly among them is the unfortunate threat to the global economy by the new Omicron coronavirus variant that is raising considerable global concern, shutting down certain countries and several economic activities, particularly international travel. With global supply chains already stressed and global inflation continuing to grow, the extremely undesirable possibility of stagflation may once again take center stage.

With this new threat serving as backdrop this week, we also saw testimony by Federal Reserve Chairman Jerome Powell and Treasury Secretary Janet Yellen before Congress. In unexpected hawkish moves, they veered off recent script and suggested that the legally imposed U.S. debt ceiling may be cause for future recession (Yellen) as well as the more obvious fact that current inflation was in fact not likely to be “transitory” (Powell), confirming what markets and interest rates have been reflecting all along.

These telling events were capped this week with a much lower than expected Labor Department nonfarm payrolls report Friday that revealed this year’s lowest monthly job increase of only 221,000, well below forecasts that called for an increase of 500,000 to 750,000.

Going back to the previous Friday, a shortened post-holiday trading session, fresh reports out of southern Africa of a new variant, named Omicron, of the COVID-19 virus ravished asset prices throughout the world. This Omicron variant is officially being labelled as a “variant of concern” by the World Health Organization and U.S. health authorities as it is being reported to be more contagious than any other previous variant, including the predominate Delta variant that continues to plague the globe.

This designation and preliminary scientific reports led to huge declines in almost all major asset classes with the exception of those that serve as traditional investment safe havens, such as gold and U.S. Treasury securities. Last Friday alone, the bellwether U.S. Treasury yield fell 20 basis point (0.20%) to a three-month low of 1.47%. This yield fell even lower through this week with continued concerns of the potential of this variant, particularly by the leading coronavirus vaccine makers. By the end of this week, the market saw the ten-year Treasury yield fall another 15 basis points (0.15%) to below 1.35%: 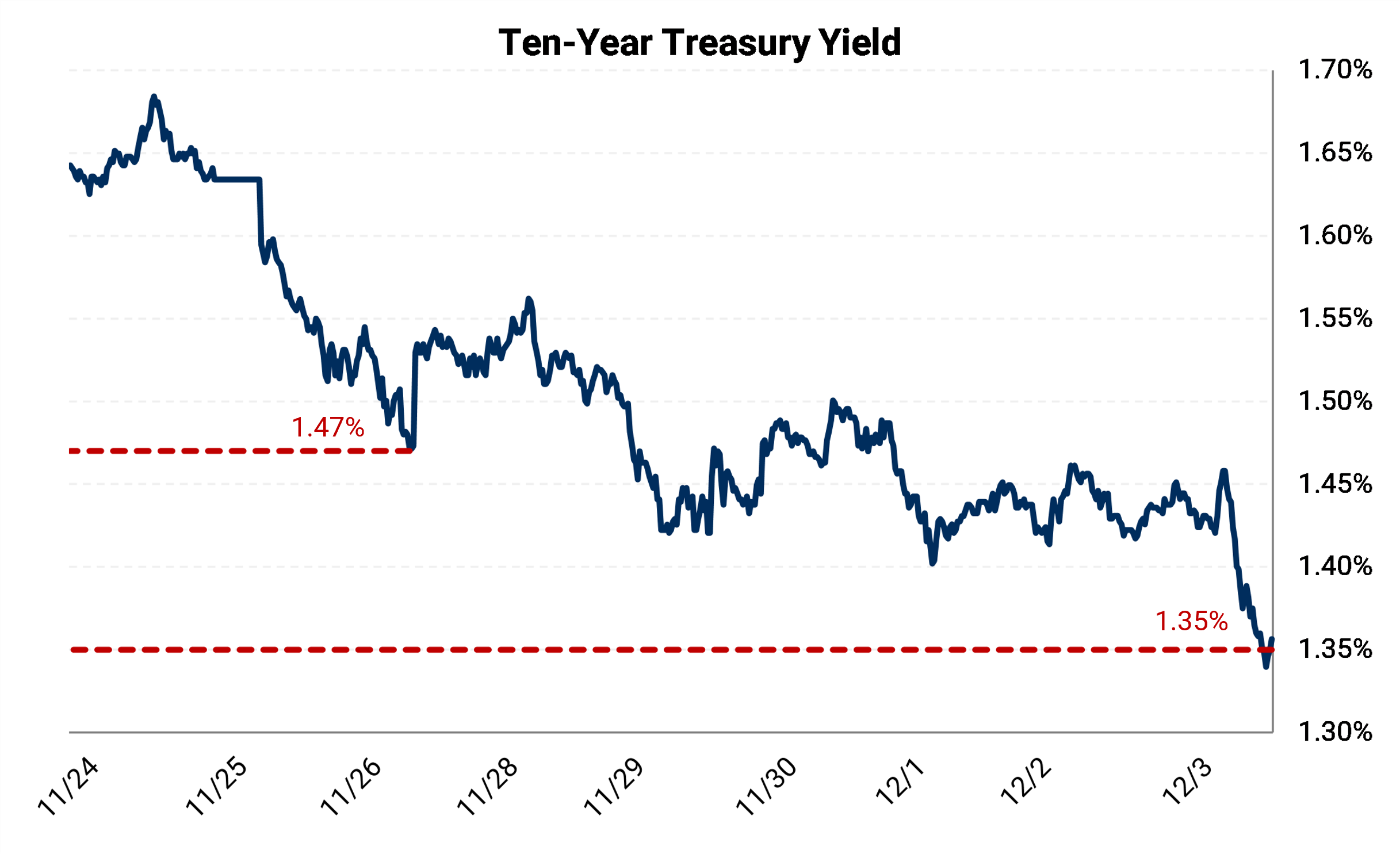 The advent of the Omicron variant of the coronavirus risks posing new challenges for global central bankers by threatening economic growth while adding to inflation pressures. This is the initial analysis of economists, who warn that possible new restrictions on activity risk derailing plans to withdraw monetary stimulus while reinforcing the same imbalances that have fueled the current wave of surging prices and hence inflation.

Omicron has hit the world just weeks away from key decisions by global central banks, with the Federal Reserve possibly accelerating a tapering of its stimulus at its December FOMC meeting, the Bank of England potentially about to raise interest rates, and the European Central Bank plotting how to ease the Euro zone off of emergency bond buying. All are preparing to respond to soaring inflation, which has reached a three-decade high in the U.S., the highest in the Eurozone’s history, and a 10-year record in the U.K.

Fed Chair Jerome Powell has referenced twin dynamics that Omicron presents. In his own comments, this new variant poses “downside risks” to employment and growth, but also “increased uncertainty” for inflation. The question is, how much does it delay the restart of economies? Delay means weaker growth in the short term, but potentially stronger growth later.

Complicating the decision for monetary policy makers is the risk that Omicron leads to fresh curbs in manufacturing hubs such as China, aggravating supply chain issues, while intensifying labor shortages elsewhere as health fears deter people from returning to work. Such forces could further spur inflation, which already faces a potential acceleration thanks to robust consumer demand heading into the holiday season, supported by pent-up savings. On the flip side, disinflationary impulses could include further selloffs in financial markets like the slump in energy prices. It’s bad for growth if lockdowns return.

Besides a sharp decline in interest rates across the yield curve, the other major impact that this new Omicron threat poses is a delay in the Federal Reserve’s tapering, pushing back the commencement of rate hikes. Prior to the Omicron news, initial Fed rate hikes were priced into the forward curve as early as June of next year. After the rally in the fixed income markets throughout the week off of this news, initial short-term interest rate hikes are now priced in later in 2022, more towards September: 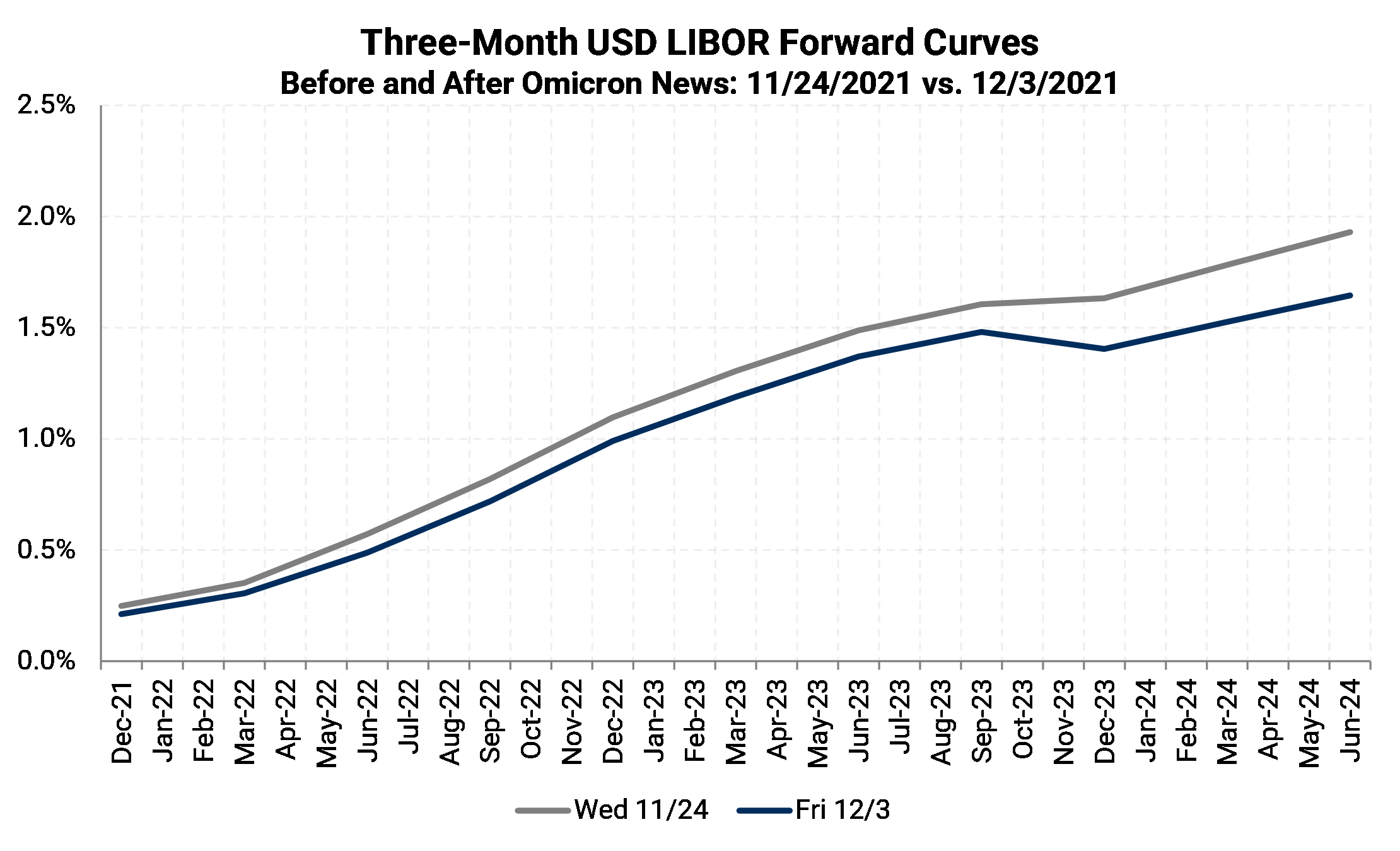 The U.S. economy added back much fewer jobs than expected in November, while the unemployment rate actually fell further than anticipated to the lowest since February 2020.

November nonfarm payrolls increased 210,000 versus the average forecast of +575,000. This was the lowest monthly increase this year. October payrolls were revised upward to +546,00. Atypically despite the big miss in new jobs, the unemployment rate fell to 4.2% versus an expected 4.5%, a strong drop from October’s 4.6% rate: 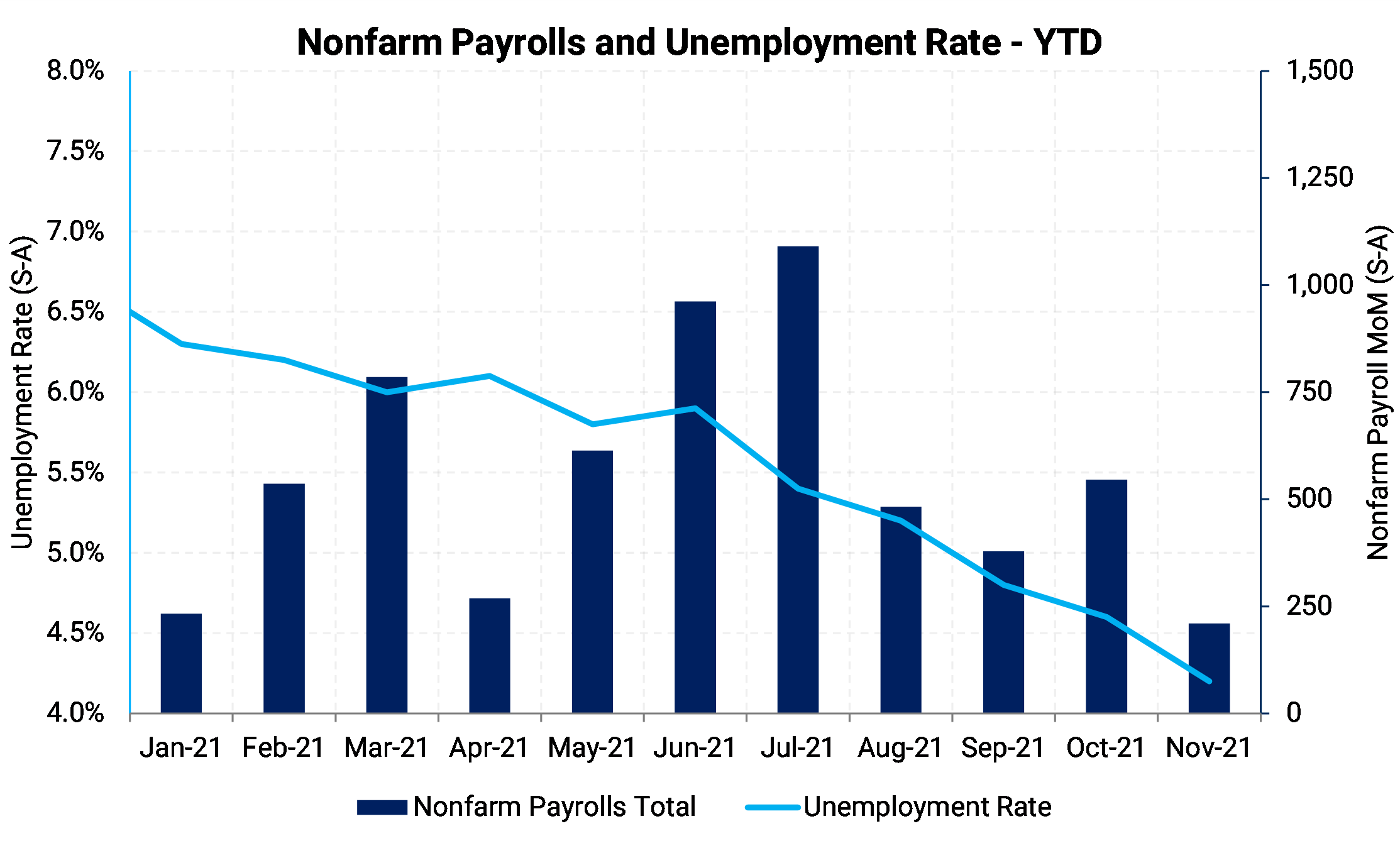 The underlying momentum of the labor market is still strong, but this past month shows more uncertainty than expected, adding to fixed income market volatility. On a strong note, average hourly earnings in November rose 0.3% over October, or 4.8% YoY.

Initial jobs tallies this year have seen substantial revisions, with months showing low counts initially often bumped higher. The October and September estimates were moved up a combined 82,000. Sectors showing the biggest gains in November included professional and business services at +90,000 jobs, transportation and warehousing at +50,000 jobs, and construction at +31,000 jobs. Even with the holiday shopping season approaching, retail saw a decline of -20,000 positions.

In his congressional testimony earlier in the week, Fed Chairman Powell said he expects the central bank’s policy committee to discuss at its meeting this month (December 14th-15th) the stepping up of the level at which it is tapering its monthly bond purchases. Powell said he sees the unwinding to conclude “a few months” sooner than expected.

The disappointing 210,000 gain in non-farm payrolls in November suggests the labor market recovery was faltering even before the potential impact of the new Omicron variant, possibly as a result of the rising infection rates in various parts of the Northeast and Midwest. Nevertheless, the Fed is expected to still push ahead with its plans to accelerate the pace of its quantitative easing tapering at this month’s FOMC meeting.