As the U.S. economy continues to claw its way back from the pandemic, traders continue to look for fresh signals on whether that growth will translate into inflation that ultimately prompts the Federal Reserve to withdraw its easy money support. This Friday’s payrolls data did little to provide a clearer view of the state of the labor market or hints to whether the central bank is likely to scale back its monthly asset purchases, otherwise known as “tapering”.

The May nonfarm payrolls and unemployment report continued to disappoint those in the market looking for a swift and substantial recovery, while it reinforced the monetary stances continued by the Fed. Despite rising by an additional 559,000 new payrolls from April’s upwardly revised level of 278,000, the market was anticipating 700,000+ new jobs for the month. May’s unemployment rate fell slightly to 5.8% from April’s level of 6.1%. Long-term Treasury yields and interest rate swap levels declined, the U.S. dollar fell, and most major equity indices climbed following this report.

The Fed is likely to see this report as a modest improvement but not near the “substantial further progress” on employment required to taper its monthly $120 billion asset purchase program. While inflation is now topping the central bank’s 2% goal, job gains are likely still well below their desired goals. 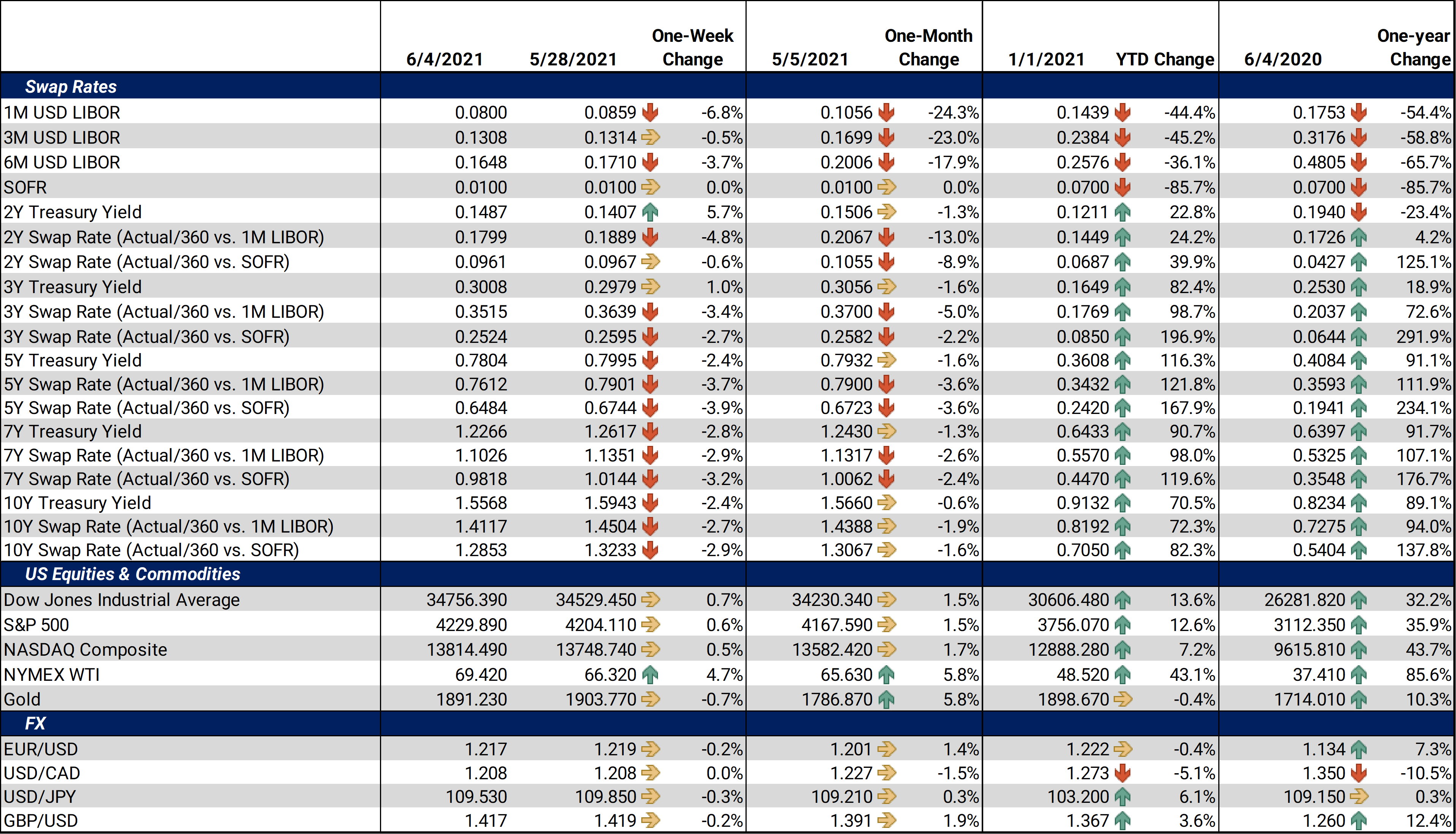 With the Fed focused on broader employment measures, today’s report does little to fan the flames of tapering talk. The broad U-6 unemployment rate edged lower, albeit still in double-digits at 10.2%. A number of Fed officials have cited the employment-to-population ratio as a better, more complete measure of the labor market than the unemployment rate. This ratio was 58% in May compared to a pre-COVID ratio of 61.1% at the end of January 2020. Applying this measure, there is still a good way to go to get back to “normal”: 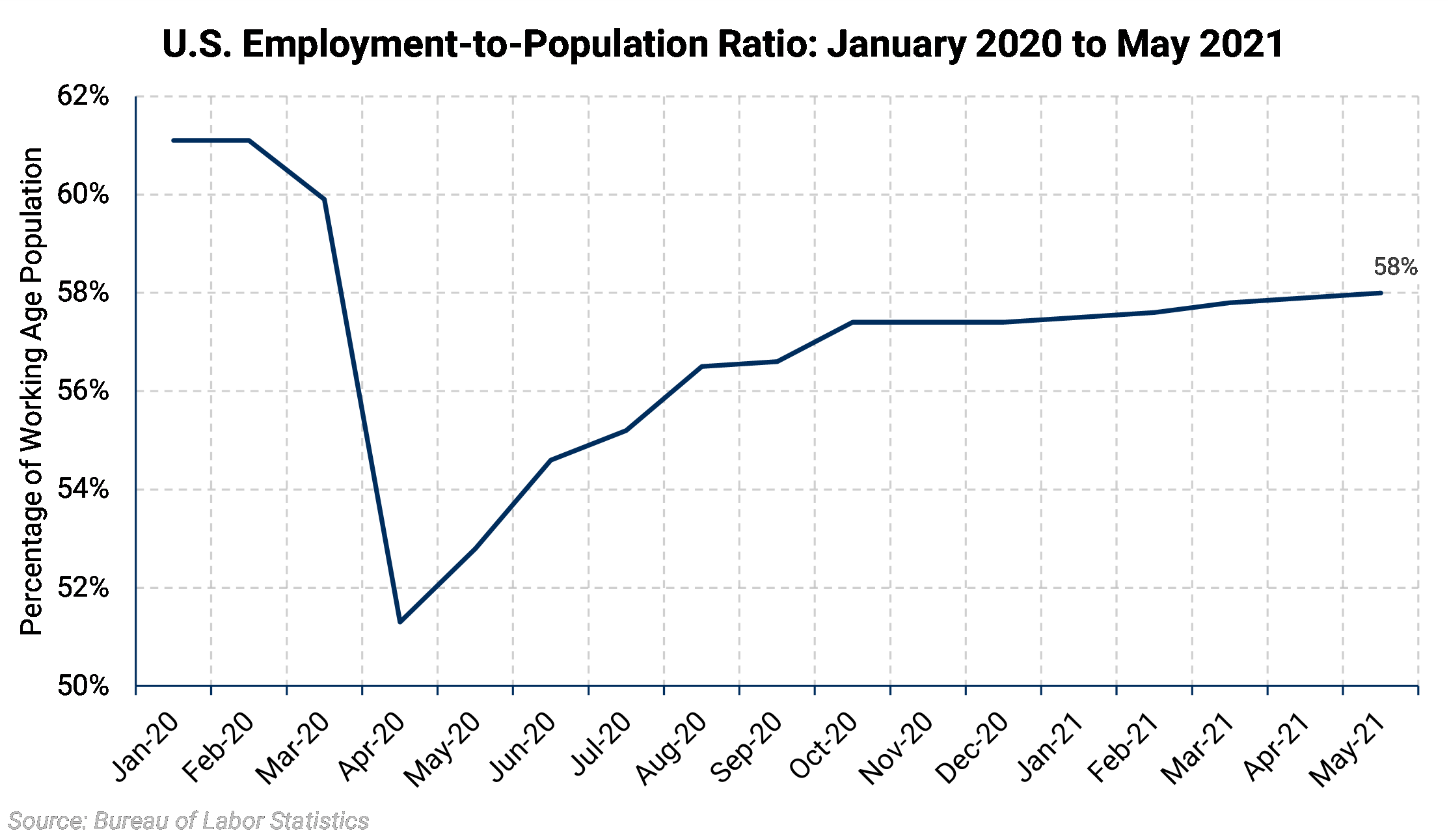 All in all, with the outcome-based Fed focused on the employment side of its mandate as it attempts to run the economy hot, Friday’s jobs data does not shout for an imminent need to scale back bond buying. However, on June 7th, the Fed will begin liquidating its $13.7 billion corporate credit portfolio (bonds and ETFs) amassed last year during the pandemic, the Federal Reserve Bank of New York has said.

The June and July jobs data will test whether the recent slowdown in hiring stemmed from Americans opting to receive unemployment benefits instead of seeking to get back to work, as augmented benefits will expire in half of the states across the nation.

Fed Chairman Powell has said numerous times the Fed wants to see the economy back to full employment before they raise rates. The chart below shows that payrolls need to rise by 7.6 million to get employment back to where it was before the pandemic: 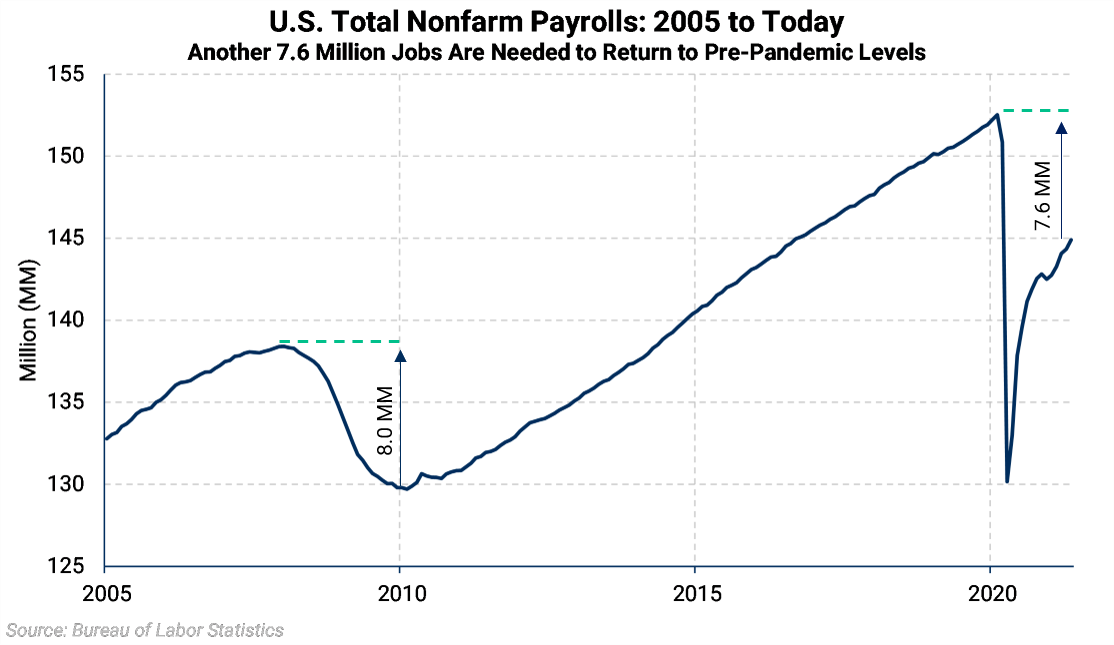 A broader improvement in the labor market requires faster job growth among service providers, like the leisure and hospitality industry, that have suffered a lengthier disruption from the health crisis. The data for the last two months suggest that the rising demand for labor associated with the recovery from the pandemic put upward pressure on wages, according to a Labor Department statement.

The number of long-term unemployed, those out of work for 27 weeks or longer, declined by 431,000 in May, the most since 2011, suggesting that Americans who lost their jobs early in the pandemic are finally returning to work.